The Marco Rubio Amendment That Could Kill the Iran Deal

Sen. Marco Rubio has proposed a change to the Iran nuclear review bill that could unravel a carefully crafted compromise and kill the Obama Administration’s negotiations.

At issue is a one-page amendment from the Florida Republican and 2016 presidential candidate that would certify as part of the deal that Iran’s leaders have publicly accepted Israel’s right to exist as a Jewish state, a proposal earlier pushed by Israeli Prime Minister Benjamin Netanyahu.

Earlier this month, President Obama rejected that idea. “The notion that we would condition Iran not getting nuclear weapons in a verifiable deal on Iran recognizing Israel is really akin to saying that we won’t sign a deal unless the nature of the Iranian regime completely transforms,” the president told NPR. “And that is, I think, a fundamental misjudgment. I want to return to this point: We want Iran not to have nuclear weapons precisely because we can’t bank on the nature of the regime changing. That’s exactly why we don’t want to have nuclear weapons.”

Many Republicans support the idea, however, while some influential Democrats, such as New York Sen. Chuck Schumer, have declined to comment on any amendments.

“If it gets offered, that’s a very hard vote because we all support Israel’s right to exist and Iran recognizing that,” says South Dakota Republican Sen. John Thune. “I think that’s awfully hard to vote against but we’ll see how it is structured and if it happens or not.”

After 18 months of negotiations, U.S., Britain, China, France, Russia, Germany and Iran struck a framework agreement on April 2 to limit Iran’s ability to build a nuclear weapon in exchange for reducing economic sanctions. The negotiators now have about two months to meet their June 30 deadline to seal a comprehensive accord and find a compromise to major issues, including the level of enriched uranium Iran is allowed to stockpile and the pace of the repealed sanctions.

The bipartisan Senate bill prevents the president from waiving Congress’ economic sanctions against Iran for up to 52 days after submitting the agreement’s text to Congress. The Obama Administration had pushed back on the congressional oversight but relented after changes to the bill and evidence that the bill would receive a wave of support. On Tuesday, Tennessee Republican Sen. Bob Corker and Maryland Democratic Sen. Ben Cardin announced that their bill has a veto-proof 67 co-sponsors.

But Cardin and others believe that Rubio could upend the bill if he introduces his controversial amendment for a vote. The powerful pro-Israel lobby AIPAC is taking Obama’s side in fear that it might bring the overall deal down, according to Thune. An AIPAC official told TIME that they are requesting senators to “bear in mind” the need to retain consensus and to “refrain from supporting provisions that could harm that bipartisan support.” The official added that AIPAC is supporting the leadership of Corker and Cardin, who says that the Rubio amendment could do three things: derail the bill, hurt the Administration’s negotiations and help Iran. “All three are horrible results,” says Cardin.

Corker urged his Republican colleagues during lunch Tuesday to understand the precious balance of the deal. 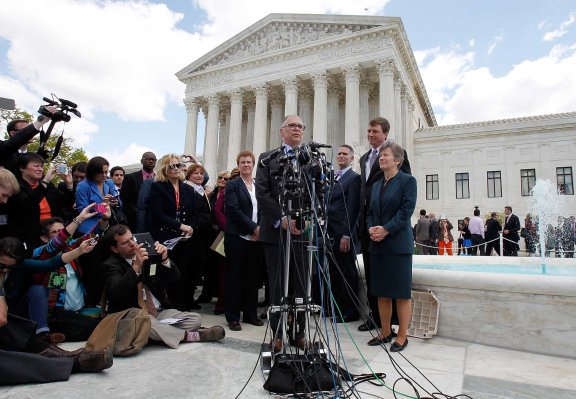 The Man Whose Marriage Was Debated by the Supreme Court
Next Up: Editor's Pick