How To Negotiate the Problem of Women and Men Negotiating

After Ellen Pao lost her sex discrimination case against the venture capital firm Kleiner Perkins, she announced a new tactic to level the playing field and reduce gender bias in the workplace: her company Reddit, where she is now interim CEO, would ban salary negotiations for new employees. Since men tend to negotiate more often and more aggressively than women, they land higher salaries, Pao noted. Research also shows that when women do negotiate, they face a backlash—what’s called a “social cost” of asking. They’re less likely to be hired, trusted, deemed likeable and admirable colleagues, and appointed to important positions. No wonder 63 percent of millennial women in Levo League’s 2015 survey said they feel uncomfortable negotiating a job offer.

Some greeted Ellen Pao’s ban with cheers, saying that it reduces the impact of negotiation skills and therefore narrows the gender pay gap. A “no negotiation” policy helps eliminate social costs stemming from prescriptive stereotypes, such as the idea that women should be concerned with others, not assertively individualistic, hard bargainers. Further, since new hires don’t have access to employers’ information to advocate for themselves from a position of equality and strength, Pao’s move underscores the need for more transparency, which would also foster the “equal opportunity environment for everyone” she seeks.

Others balked at the idea of banning negotiation and argued instead for equipping everyone with the skills necessary to ask for the compensation they deserve. “Ask for the raise!” urges Sally Krawcheck, the CEO of Ellevate who once ran units of Citigroup and Bank of America: “People who ask get more money, and people who don’t ask tend to get less.”

The two sides of the debate that has emerged in the wake of Pao’s announcement both speak to the need to examine further how and why negotiation might help women in the workforce. In addition to addressing the question of whether or not an individual should negotiate, this discussion should prompt deeper reflection upon the fact that the burden to bargain successfully need not fall solely on an individual. Organizations can encourage people to feel comfortable negotiating by fostering a negotiation culture inside the organization. The human resources staff also can and should work to eliminate hidden biases in hiring, appraisal, and compensation decisions, while still allowing people to bargain on their own behalf.

Furthermore, women who don’t build up skills in the practice of negotiation give up a potentially powerful way to help gender-neutral and family-friendly organizations emerge. According to Deborah Kolb, author of seven books on conflict and negotiation, workplace negotiation is ubiquitous and occurs around a range of everyday activities, well beyond initial compensation terms.

“We constantly negotiate about what kind of work we do, what jobs we have, what resources we need, our goals and objectives, or work schedules, the work itself, our roles and responsibilities and authority,” she observes in her newly-released book, Negotiating at Work. Kolb has researched negotiations for 35 years and taught students and executives how to do it. She explains that many organizations today still display outdated assumptions and practices that are holdovers from previous eras—what sociologists call the negotiated order—when male workers without significant family responsibilities were the primary instigators making policy.

These assumptions include things like expecting face time at the office or the ability to work long, uninterrupted hours. They also include the expectation that mothers (but not fathers) be the “trailing spouses” in job changes—and related, but less openly-discussed practices like discouraging a mother from accepting an international assignment because it involves relocating and “might uproot her family,” or not being transparent about criteria for promotion so women can position themselves to advance to top management later.

When a person negotiates about things other than what Kolb calls the “standard fare of bargaining”—essentially, compensation and employment—she or he raises an issue that challenges an established practice that others may not see as a problem. If these negotiations raise awareness about these more subtle assumptions and result in small changes, the negotiated order of the organization begins to change. The definition of what’s acceptable expands.

Case studies in Negotiating at Work illustrate how this dynamic occurs. A powerfully detailed one involves Cheryl, a 15-year veteran executive of a heavy manufacturing firm, who distinguished herself as a top performer in international and financial management, mergers and acquisitions strategy, valuation, and structure. When offered the job of chief financial officer of the firm’s $3 billion supply division, Cheryl and her family moved to its Texas headquarters. After two years, however, her husband and teenage children longed to return to their home state where they had family and community connections. With no precedent in the firm for flexible work or telecommuting, Cheryl negotiated with her boss a solution she calls a tri-office arrangement: she spends time working at the headquarters office, in the field office, and at a home office in Pennsylvania. The proposal she offered benefitted her boss and the company, herself, and her family—a successful win-win-win for all.

With negotiations like Cheryl’s (and Kolb offers many other examples in her book) for telecommuting or flex time or another innovative work arrangement, the definition of what’s acceptable to discuss and to try changes to include family responsibilities and other important commitments. Kolb demonstrates how such small negotiations that occur daily in organizations can add up to a new negotiated order that makes room for more diversity in how people work. She also tells of an ambitious tech division vice president (DVP) who was a strong candidate for promotion but was not yet on her boss’s radar. She initiated a negotiation about adjusting the criteria for the job, so that she would not automatically be excluded either by her fewer years in the DVP role or her lesser time entertaining customers on evenings and weekends. By putting herself forward, she influenced her boss to consider promoting someone who could do the job well, period, and helped others by example to chart their future career paths in the process.

“What starts as an individual negotiating in the context of an existing negotiated order might yield to more systemic changes, which can create an entirely different playing field for those negotiators who follow,” notes Kolb. These small wins spread from those directly involved in the negotiation to others who pick up on the new possibility and ask for it. People become more comfortable with the idea and the organization begins to change, often by adding a policy that empowers others to make a similar request.

So if women and men decline to negotiate at work, they risk abandoning important opportunities to impact outmoded ways of working. They give up a chance to influence the negotiated order that defines their organization—an entity likely designed for a workforce that no longer resembles the people for whom it was originally a comfortable fit. The bottom line here is that to negotiate opens up the potential to achieve a small win for yourself that may engender a larger gain for others.

Nanette Fondas, co-author of The Custom-Fit Workplace, writes about business, economics, and family. This piece was originally published in New America’s digital magazine, The Weekly Wonk. Sign up to get it delivered to your inbox each Thursday here, and follow @New America on Twitter. 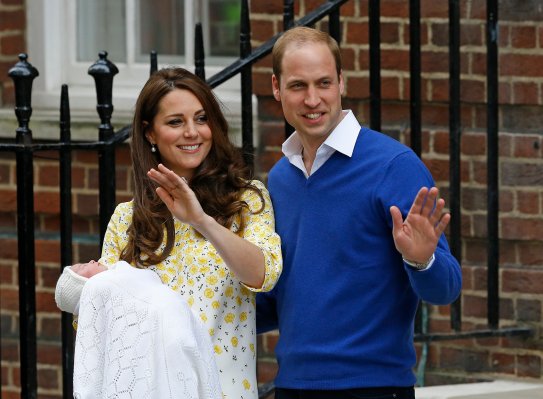 How Birth Order Will Shape the New Royal Princess
Next Up: Editor's Pick