Inside Nepal's Next Challenge: Overflowing Hospitals

Hospitals throughout Nepal are flooded with patients, with thousands in need of care for acute injuries after a massive earthquake that the country’s leader said may have killed up to 10,000.

“Most public and private hospitals sent all of their pertinent staff surgeons to Kathmandu Teaching Hospital, which is the trauma center, and it’s so overrun that they are treating people in the streets,” says Cindy Aliza Stein, director of global programs at Real Medicine Foundation (RMF), who is helping coordinate the response. Other hospitals in the area are doing the same, partially because of high numbers of patients and partially because of structural damage and trepidation among many to be inside buildings amid the risk for aftershocks.

Even the weather has become a roadblock to care. “It’s monsoon season, so the rain has started,” Stein says, stressing that hospitals need more tents and tarps to do medical care and triage effectively and to prevent survivors from being exposed to the elements. Many physicians working the crisis have slept very little since the earthquake struck Saturday.

MORE: Medics Race Against Time to Save Nepal’s Quake Survivors

“There are very complicated fractures and not enough medical personnel to actually handle them,” says Dr. Martina Fuchs, the CEO of RMF. “Often in these situations there are more amputations than actually needed. That’s really sad and means longer-term rehabilitation. Being handicapped in a developing country is really difficult.”

If patients are not immediately attended to, the fear is that injuries can become infected, result in long-term complications or even prove fatal. And medical responders are struggling to access people in rural areas. “There are areas in villages where they are saying up to 80% or more of structures are demolished,” Stein says. “Over the next few days that’s the focus.”

Aid groups are also trying to care for survivors with pre-existing conditions, like cancer or diabetes, who may need special medical attention or medication. “The impact of the earthquake has dramatically reduced the capacity of the health system to resume the delivery of health services, as well as other services such as water and sanitation,” says Jim Catampongan, an Asia-Pacific health coordinator for the International Federation of Red Cross and Red Crescent Societies.

MORE: 6 More Ways to Give to Nepal Earthquake Relief

Overcrowding issues are not only reserved to trauma centers. Bottlenecks of volunteers at the Kathmandu Airport have also caused some organizational headaches. “The vast majority of organizations have not registered beforehand through the ministry’s process and they are arriving with a lot of staff and large amounts of supplies,” Stein says. “When they hit the airport, the import of goods that were unsolicited has actually caused a bunch of logistic problems. We are trying to prevent that by coming by land and trying to procure things as local as possible.”

Catampongan adds that Nepal has made significant health gains in the past 10 years despite being a poor country with weak health infrastructures. “The risk is that many of these gains could be lost,” he says. “We could see resurgence in epidemic-prone diseases likes malaria and cholera, which Nepal has worked hard to control. Spikes in malnutrition is a major issue in the country especially for pregnant women and children. We could also see a drop in services for issues like noncommunicable disease, HIV and tuberculosis.” 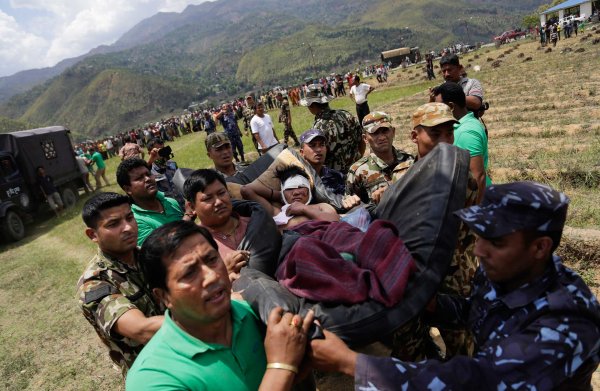 Nepal Races Against Time
Next Up: Editor's Pick