Kathmandu Airport Shelters the Stranded as Rescue Teams Fly In

As many as eight planes circled unseen amid Kathmandu’s rainy skies on Tuesday. Four kilometers below, the small airport was now host to both Chinese and American military aircraft, their uniformed operators offloading critical aid, while doubling as a campsite for the nation’s remaining tourists eager to get home.

Claudia Nodlind, 51, was among those waiting for a seat on an airplane out of Nepal. She arrived in Kathmandu from Sweden on April 21 with her 21-year-old daughter Diana to meet her son, who was nearing the end of a 10-month motorcycle trip from Indonesia to Nepal. On Saturday afternoon when the earthquake struck, Nodlind and her daughter were waiting for a bus in Thamel, a popular neighborhood for tourists. The temblor was so strong it knocked people off their feet.

“I thought we were going to die,” Nodlind told TIME on Tuesday, while sitting cross-legged beside her belongings outside the departure bay of the Kathmandu airport. “I just kept thinking, I just have to get Diana under me somehow, to protect her,” She said she could still see Thamel’s narrow streets trembling under 7.9 magnitude quake.

In the moments that followed, Nodling flagged a reluctant taxi driver and, together with her daughter and one of her son’s friends, cut a criss-crossing path through the crowded streets, often forced by downed power lines and rubble to double back in search of alternate routes. Nodlind, her daughter and son, would spend the weekend in tents in the hills outside the capital, before the two women returned to the airport on Monday. They have camped there ever since.

“There is a refugee feel to it,” Stefan Syrigos, 25, told TIME, while seated outside the departure terminal at the Kathmandu airport. Like the many Nepalese who traded their homes for the safety of open spaces, the German tourist estimated he spent Saturday night with a crowd of 2,000 in Kathmandu Durbar Square, one of the city’s UNESCO sites severely damaged by the earthquake. He managed to avoid injury on Saturday by stepping into the covered entryway of a nearby home, sheltering with a local family. When a 6.7-magnitude aftershock hit around lunchtime on Sunday, Syrigos decided it was time to head home. But he would have to wait until Tuesday for a seat to Europe.

By then, planes sent by the governments of China, India, and Bhutan had squired many of their citizens out of harm’s way. On Tuesday, Belgian officials were arranging their own exit strategy as a new batch of commercial flights was further lessening the crowds.

But just as tourists and other visitors were leaving the country, recovery teams were eagerly rushing in. On Tuesday, men and women with medical kits and sleeping bags, safety poles and headlamps, satellite phones and emergency generators could be seen disembarking airplanes in Kathmandu.

By late afternoon, the airport’s luggage carousel seemed to strain under the weight of boxed perishables and countless cartons of bottled water. NGOs and volunteers with waterproof backpacks and well-scuffed travel cases gathered like sports teams in the corners of the arrival bay, each squad decorated in matching flags, logos or crests; MSF; Care; Plan; Islamic Relief; World Food Program and the European Commission Humanitarian Aid group.

A sixteen-member team of mixed medical and logistical staff from Samaritan’s Purse, known most recently for their work during West Africa’s Ebola crisis, arrived from Bangkok, expecting to grow their numbers to 20 by week’s end. A large Japan Relief Team also arrived from Thailand, their vibrant blue and red uniforms and hats unmistakeable even from a distance. The Korea Disaster Relief Team also arrived, adorned in fluorescent orange.

The bustling exchange of passengers at Kathmandu Airport might almost have seemed ordinary were it not for the frequent aftershocks, reminders of the devastating tragedy some were desperate to leave behind — and others were arriving to lend what help they could. 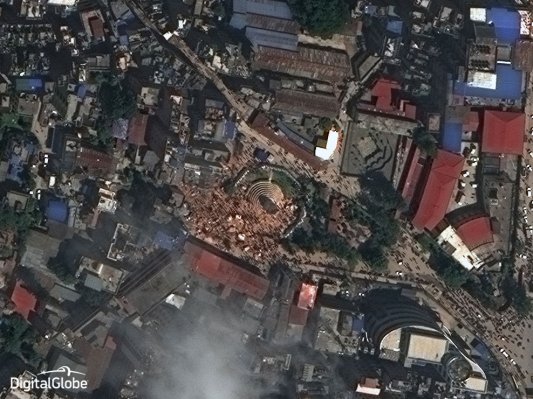 See Satellite Images of Nepal Before and After the Earthquake
Next Up: Editor's Pick