Alice Eve Says Bruce Jenner Is 'Playing at Being a Woman'

Star Trek actress Alice Eve apologized in a statement to Entertainment Weekly for saying former Olympic champion Bruce Jenner is “playing at being a woman.” The actress made the comment in a now-deleted Instagram post about the newly-out transgender woman that she later deleted.

“I deeply apologize for offending anyone. I support equal rights and equal dignity for all. I have deep compassion and support for Bruce Jenner,” Eve said in a statement to EW. “My intention was not to offend. My intention was simply to express that, with the overdue and welcome acceptance of us all living on a gender spectrum, we must encourage equality for all.”

In an interview last week, Jenner revealed that he had been struggling with his gender identity throughout his entire life and now considers himself a woman.

But Eve wasn’t as supportive as many other celebrities have been.

“If you were a woman no on would have heard of you because women can’t compete in the decathlon,” she wrote in a deleted Instagram post, the BBC reports.

“Until women are paid the same as men, then playing at being a ‘woman’ while retaining the benefits of being a man is unfair,” she added.

Eve’s followers quickly denounced the comments as bigoted, and she deleted the post.

“I do agree that the struggle for transgenders is unique and horrific,” she said in follow-up posts.“However, I do want to also support a cause I strongly believe in, the right for women to have equal rights to men.”

She later tried to clarify further: “I’m not saying by identifying they are negatively impacting feminism, I am saying we have to refine the language on this topic so all men, women, and transgenders are accurately represented in their process of self-identification. … Maybe this needs a little thought.”

She then posted the following images. 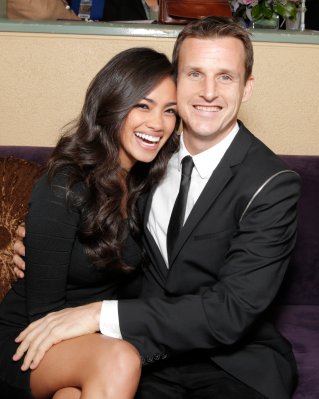 Rob Dyrdek Proposes to His Girlfriend in True Fairytale Fashion
Next Up: Editor's Pick