Somali Refugees Fear Being Thrown Out of Kenya

Somali refugees look through a barbwire fence in Dagahale, one of the several refugee settlements in Dadaab, Garissa County, northeastern Kenya in 2013.
Siegfried Modola—Reuters
By Julia Steers / Dadaab.Kenya

Salat became a member of the Islamist al-Shabab group in Somalia more by bad luck than inclination; he happened to be one of nine boys standing by the school gate when the group raided his school looking for “recruits.”

The younger boys were separated into two groups; some were sent to cook, others like Salat, were given clubs and sent into Mogadishu’s marketplaces to beat people acting outside of their interpretation of Islamic law.

Weeks later, convinced he would be killed, Salat escaped the al-Shabab compound and fled to Kenya and the Dadaab refugee camp, home to around 350,000 mainly Somali refugees.

In the wake of the al-Shabab attack in April at Garissa University in which 148 people were killed, Kenyan vice-president William Ruto said the camp was used by al-Shabab and demanded the United Nations close Dadaab within 90 days. Leonard Zulu, an official of the United Nations High Commission for Refugees in Dadaab, explains that aside from the logistical impossibility of repatriating the refugees within that timeframe, returning them to Somalia would be “a humanitarian catastrophe.”

Dadaab has been good for Salat. He did not tell the U.N. of his association with al-Shabab so does not want his surname published. He first worked as a porter at the camp and he now sells the drug khat which is common and legal in East Africa. “I expected a better life here and already that’s progress. So I expect more big life changes,” he says.

Fartun Hassan, 20, has been at the camp for less than a year. She left Somalia alone after al-Shabab killed her friends at their streetside tea stand one morning. The women were killed because they often sold tea to police officers stationed nearby. Her parents are dead and she had recently lost a brother who was killed by an al-Shabab bomb targeting African Union soldiers.

Fartun missed out on education in Somalia but she is working on her English because now, she says, “I can have a future.” She hopes to be a teacher, to teach business studies and math but sees no hope in a return to Somalia.

An aerial view shows an extension of the Ifo camp, one of the several refugee settlements in Dadaab, Garissa County, northeastern Kenya in 2013.
Siegfried Modola—Reuters

Most refugees here have lived in Dadaab for decades after fleeing when Somalia collapsed into civil war in the early 1990s. Many young people were born here and for these Kenyan-born refugees, Somalia is foreign and al-Shabab are only known through news reports and gossip.

Ibrahim Omar, a 22-year-old student, was born in Dadaab, and is contemptuous of the Somalis who join al-Shabab. “Those guys in Somalia, they’re less educated. They’re given false promises that they’ll get money, power, guns, then they do suicides. They kill themselves before they even get any of that money,” he says.

Mohammed Hussein Mahamud,23, a Kenyan-born Somali student, is concerned repatriation would disrupt his last secondary school exam, scheduled for November. He needs to take it in order to go to university, and on to medical school, he explains in near-perfect English.

Salat says the camp is a major improvement on life in Somalia. “Here everybody is busy, people are working or have education. There, there is nothing to do. The only option is to join the militants in order to get your daily bread,” he says.

He is certain that he, along with his children, will be forced into al-Shabab’s ranks if his family is sent back to Somalia. “Shabab is everywhere. They cannot be finished just by closing the camp. If my kids go back there, they will recruit them like they forced me to join,” he says.

Meanwhile the United Nations continues its discussion with the Kenyan government to halt the closure of the camp and the new displacement of 350,000 people. 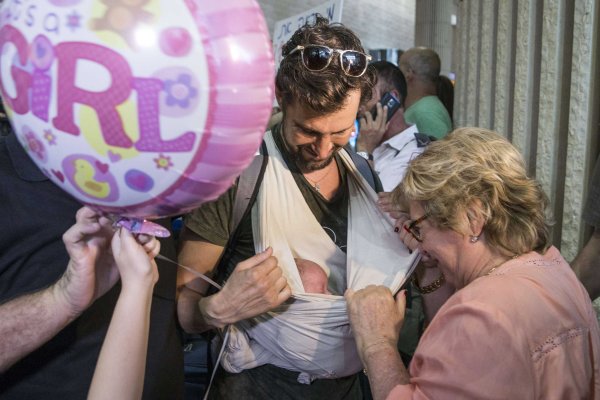 Israel Evacuates Surrogate Babies but Not Mothers
Next Up: Editor's Pick