Nepal's Economy Will Take Years to Recover From the Deadly Earthquake

Even as the death toll from the Nepal earthquake nears 5,000 — and it looks set to rise much further if reports trickling in from devastated rural areas are anything to go by — experts are warning that the economic aftershocks will be felt for years after the last victims have been buried and rubble cleared.

Nepal is one of Asia’s poorest nations with unemployment over 40% and per capita GDP of just $1,000. Some 59 out of 75 districts have been affected by Saturday’s 7.8-magnitude quake — 11 of them severely. The U.S. Geological Survey estimates that reconstruction costs could exceed $10 billion, or half of national GDP.

“With housing construction standards in Nepal being extremely low due to the poverty of the general population, the impact of the earthquake has been devastating,” says Rajiv Biswas, Asia-Pacific chief economist for IHS analysis group.

The tourism sector, accounting for around 10% of GDP and a similar percentage of all jobs, looks gutted in the short-term.

Nepal boasts eight of the ten highest mountains in the world, with spectacular scenery to match. The fact that it only receives around 600,000 visitors each year makes hospitality a key area of potential growth.

Yet most major hotels have now been shuttered for at least a fortnight while structural assessments are completed, and Kathmandu airport has been thronged by shell-shocked vacationers clamoring to escape the bedlam. Airplanes have been held on the tarmac for hours as the besieged terminal struggles to cope with the increased traffic alongside vital aid deliveries.

Compounding matters, four of this mountain nation’s seven UNESCO World Heritage sites — such as the 100-foot Dharahara Tower in the capital — have been severely damaged. At least 18 climbers at the Everest Base Camp died during an avalanche, while the popular hiking hamlet of Langtang has likely been wiped out by a landslide, according to the New York Times.

“Rebuilding efforts and hopefully recovery can be quick,” Kenichi Yokoyama, Nepal director for the Asian Development Bank, tells TIME. But they will also be uneven.

The service sector and manufacturing — Nepal boasts industrial plants for many Asian and international firms, including Coca-Cola — face disruption, as factories have been evacuated indefinitely until structural reports can be compiled. Damage to infrastructure in rural areas could also be significant.

MORE: Six Ways you Can Give to Nepal Earthquake Relief

On the other hand, the farming sector appears to have escaped relatively unscathed. Agriculture remains Nepal’s principal economic activity, employing 80% of the population and providing a third of GDP.

“Unless land is affected by landslides, or farmers are injured, the agriculture sector may not necessarily suffer major damage,” explains Yokoyama.

Then there is hydropower — the other great hope for Nepal besides tourism. The nation has about 6,000 rivers stretching some 28,000 miles, ranking the nation the second richest globally for inland water resources.

Hydropower is a major source of investment from energy-hungry neighboring superpowers India and China. Nepal is estimated to boast hydropower potential of 80,000MW — enough to power the whole of Germany — but only around 700MW has so far been exploited.

Due to poor infrastructure and extreme conditions, and with construction impossible during most ferocious weather, such schemes are exorbitantly expensive; a new India-backed 900-megawatt dam on the upper Karnali River is slated to cost $1.4 billion.

Nevertheless, Yokoyama says the latest quake is unlikely to affect investor confidence in this sector, especially as no major damage has been reported in existing hydropower stations.

“Everybody would know that Nepal has a high earthquake risk and normally these [hydropower projects] are built to take into account geological and earthquake risks,” he says.

“Hydropower projects are generally ‘over-engineered’ so as to have a significant margin of safety that takes into account regional conditions,” confirms Prof. Tony Lucey, a hydropower expert at Curtin University’s department of engineering in Perth, Australia.

Nepal’s growth was already much slower than most of its South Asian neighbors, and the ABD forecast for this year has been dropped from 4.6% to around 4.2% in light of the quake, says Yokoyama. However, from next year and beyond, reconstruction activity could support faster GDP growth, according to the Economist Intelligence Unit. The remittances sent by Nepalis working overseas, which make up about a third of GDP, will also become even more vital.

At the same time, a fraught political scene adds unpredictability to the equation. Nepal has not had a fully functioning government since the monarchy was abolished in 2008, with a disparate hodgepodge of bickering Maoist and communist splinter groups creating political inertia. Nepal is also ranked 126 out of 175 nations for corruption by Transparency International. Both of these are going to have to change if Nepalis are to truly rise from the rubble. 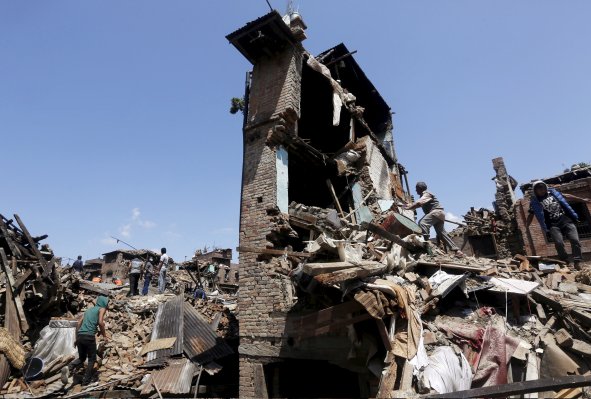 The Nepal Earthquake Was a Disaster Waiting to Happen
Next Up: Editor's Pick