International Aid to Nepal Ramps Up

As the death toll from Saturday’s 7.8-magnitude earthquake surpasses 4,350, international aid agencies and foreign governments are scrambling to deliver much-needed financial assistance and supplies to Nepal.

Since Saturday, supplies, search-and-rescue and medical teams have been sent from around the world to Nepal’s only international airport, located in the capital, Kathmandu.

Here are some of those efforts:

The U.S. announced Monday it would donate an additional $9 million in assistance for Nepal, bringing the total to $10 million through the U.S. Agency for International Development (USAID). In addition, search-and-rescue teams have been dispatched to Nepal as part of USAID’s disaster-assistance response team and 45 tons of supplies have been dispatched.

“This emergency assistance builds on our years of support for risk-reduction partnerships in Nepal,” said Jeremy Konyndyk, director of USAID’s Office of U.S. Foreign Disaster Assistance.

India has been heavily involved in the aid operation to Nepal since Saturday, sending 1,000 National Disaster Response Force personnel to help with search-and-rescue efforts. In addition, India has deployed 13 aircraft, six Mi-17 helicopters and two Advanced Light Helicopters. On Sunday, 10 tons of blankets, 50 tons of water, 22 tons of food items and 2 tons of medicine were dispatched to Kathmandu. As well as aid, India has sent three army field hospitals, an engineering task force and medical units of civilian doctors, according to the Indian Express.

The U.K. is giving $7.6 million in aid, of which slightly more than half will address immediate needs in Nepal, with the rest to be donated to the Red Cross, which is helping with rescue and recovery efforts in Nepal. An eight-member team of disaster-response specialists has been working in Nepal since Sunday. Experts from a number of U.K.-based charities including the British Red Cross and Oxfam are operational in Nepal. A Royal Air Force plane carrying 1,100 shelter kits and more than 1,700 solar lanterns departed for Nepal on Monday.

“I have now activated the Rapid Response Facility. This means we can fast-track funding to aid workers on the ground so they can provide desperately needed supplies including clean water, shelter, household items and blankets,” International Development Secretary Justine Greening said in a statement on Sunday.

China sent a 62-member search-and-rescue team on Sunday and has promised $3.3 million in aid, including emergency shelters, clothing, blankets and power generators.

Israel has sent a 260-member team to Nepal to assist with rescue and relief operations along with 95 tons of aid and medical supplies. On Monday, a plane carrying a medical team of 200 doctors, nurses, paramedics, rescue teams and other personnel landed in Kathmandu and began to set up field hospitals.

Malaysia said Sunday it will deploy 30 members from the Special Malaysia Disaster Assistance and Rescue Team (SMART) and is sending 20 doctors to help with operations on the ground in Nepal.

Pakistan deployed four Pakistan Air Force aircraft carrying rescue and relief assistance, including a 30-bed hospital and a medical team of doctors and paramedics, to Nepal on Sunday.

The E.U. is making available $3 million in its response to the Nepal earthquake. This is in addition to assistance from member states and the deployment of the European Commission’s humanitarian aid and civil-protection experts to the worst-affected areas. Emergency aid includes clean water, medicine, emergency shelter and telecommunications.

“What is needed most are medical teams and relief supplies. I call on all E.U. member states to join the coordinated European response,” E.U. Commissioner for Humanitarian Aid and Crisis Management Christos Stylianides said in a statement on Sunday.

The U.N. has released $15 million from its central emergency-response fund for earthquake victims in Nepal. Valerie Amos, the under secretary general for humanitarian affairs, said U.N. agencies were coordinating international efforts and were working with partners in Nepal, including the government, to get aid to those affected.

The World Food Programme is also providing food and supplies as well as logistical support on the ground, and UNICEF has mobilized two cargo flights carrying 120 tons of humanitarian aid, including medical supplies, tents and blankets.

But with so many cargo and civilian planes flying in to help, Kathmandu’s tiny airport is struggling to cope under the strain. Agencies warn that if you want to help, donate money not stuff and avoid hopping on a plane to Nepal to help with relief efforts in person.

“More than your plane ticket or your collection of old T-shirts, what is most needed in Nepal right now is money,” writes Claire Bennett in the Guardian.

Read this next: 6 Ways You Can Give to Nepal Earthquake Relief 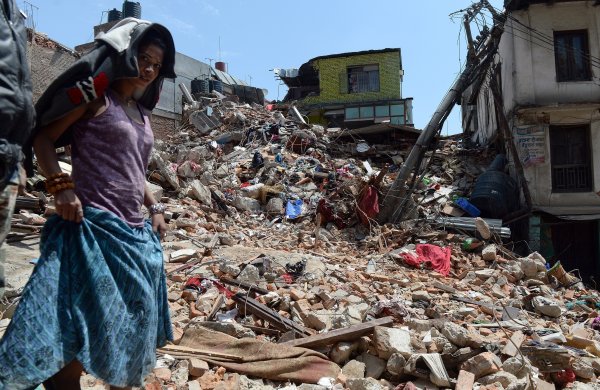 Hong Kong’s Nepalis Mobilize After Quake
Next Up: Editor's Pick