Apple Had Another Record-Shattering Quarter

The Apple logo hangs inside the glass entrance to the Apple Store on 5th Avenue in New York City.
Mike Segar—Reuters
By Tom Huddleston, Jr. / Fortune

Apple reported another blockbuster quarter Monday that shattered records from the brisk sale of iPhones. Here are the key points from the earnings release.

No one expected Apple to match its record-setting first quarter, when the company racked up nearly $75 billion in revenue thanks to a strong holiday performance in the first full quarter of sales for the iPhone 6 and iPhone 6 Plus. Apple’s $18 billion in first-quarter profits were the highest in U.S. corporate history.

Apple’s shares gained 1.6% in after-hours trading following the company’s earnings release that included an announcement that it plans to expand increase its dividend and stock buyback plan yet again.

Apple said it will increase the program by returning $200 billion in cash to its shareholder by the end of March 2017. Last year, the company increased the amount to be returned up to $130 billion (from its earlier target of $100 billion) with a target of the end of this year. CEO Tim Cook said most of the program will involve share buybacks, but the company also upped its quarterly dividend by 11% to 52 cents per share, which is payable on May 14.

The big number: While much of the buzz around Apple in recent months has focused on new products — the just-launched Apple Watch, Apple Pay and even a rumored pay-TV service — the company still draws a huge chunk of its revenue from the iPhone.

Apple said Monday that it sold almost 61.2 million iPhones in the second quarter, which is almost 40% more than in the same period last year. That beat analyst predictions of 56.8 million iPhones. The smartphones brought in more than $40 billion — or better than 69% of the company’s total revenue.

“We’re seeing a higher rate of people switching to iPhone than we’ve experienced in previous cycles,” CEO Tim Cook said in a statement.

What you might have missed: The company said it expects revenue between $46 billion and $48 billion in the current quarter, which will be the first to include sales of the new Apple Watch that started shipping last Friday. While Apple has been tight-lipped regarding official sales figures for the Apple Watch, it seems many of those who ordered the watches have a long wait ahead of them, reportedly, as less than a quarter of preordered watches were delivered over the weekend. More than 600,000 customers who preordered the Apple Watch still don’t have an estimated delivery time, according to unofficial data from e-receipts tallied by Slice Intelligence. Cook only made a vague reference to the Watch in the earnings release, saying “we’re off to an exciting start to the June quarter with the launch of Apple Watch.” 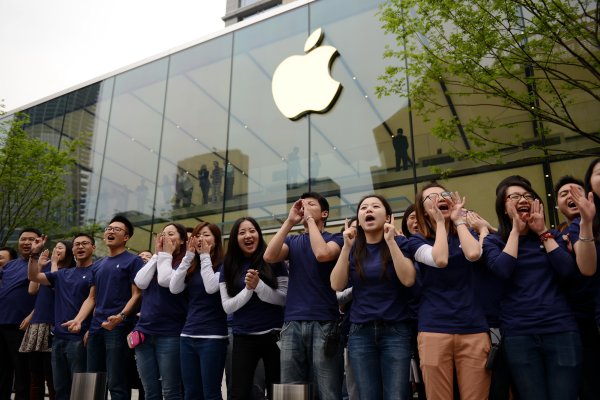 Apple Is Totally Killing It in China
Next Up: Editor's Pick