Equal opportunity is not enough to ensure gender equality, according to a groundbreaking new report from U.N. Women. Instead, governments must commit to social policies that treat women differently in order to help them achieve economic parity with men.

“We must go beyond creating equal opportunities to ensure equal outcomes,” the report says. “‘Different treatment’ may be required to achieve real equality in practice.” This report, called Progress of the World’s Women 2015–2016, is one of the first major international reports to acknowledge that legal equality for women does not translate into actual equality, and that governments must make substantial social-policy changes that enable the redistribution of domestic duties in order for women to play a truly equal role in society.

It’s the global version of what Sheryl Sandberg has been saying all along with Lean In — women will never be equal unless workplace policies adjust to fit their needs, and men need to step up to help at home. The report highlights the gap between the laws that protect equal rights for women and the realities of inequality in most of the world. The way to close that gap, according to the report, is by implementing social policies that provide paid work opportunities for women, protect domestic workers, provide affordable child care and establish paid leave for working mothers. Removing legal barriers to female employment is not enough, the report says, noting that “we also need measures that free up women’s time.”

“Governments should take actionable steps to reduce the burden of unpaid care work — which is carried by women — and create an industry of jobs and employment for services,” U.N. Women Executive Director Phumzile Mlambo-Ngcuka tells TIME. “Child care is an issue in every country, but more often than not borne by mothers. Government policy should work to professionalize this industry as much as possible, and make it affordable and accessible to all.”

Lack of resources like these may explain why 77% of working-age men are in the global workforce, compared with only half of working-age women. Globally, women earn 24% less than men, yet do 2.5 times as much child care and domestic labor as men. In developing regions, 75% of women’s employment is insecure, unprotected and poorly paid, if they’re employed at all. Only 5% of women in South Asia have formal work, and only 11% in sub-Saharan Africa.

The U.N. is calling for more “decent work” for women, which they define as a job that is well paid, secure and “compatible with women’s and men’s shared responsibility” for children and housework. The report also says redistributing household duties is “critical” for achieving substantive equality worldwide.

Child care is the thorny problem that’s hampering women’s economic advancement, both at the individual level and on a global scale. Forty-four percent of mothers in poor countries raise their young children almost entirely on their own, compared with only 29% of mothers in rich countries. In poor countries, 18% of mothers entrust child care to a female child, while in rich countries, 15% of moms have hired help and 10% have access to organized child care or a nursery. The study found that in every country, women were less likely to work when they had small children, which helps contribute to the global pay gap.

And the income women lose can have repercussions throughout their lifetimes. Lack of money often translates into lack of control over their own health decisions: 69% of women in Senegal, 48% in Pakistan and 27% in Haiti say they do not make the final decisions about their own health care. And in most countries, women are less likely to receive pensions — in Egypt, 62% of men get pensions, compared with 8% of women. That’s partly because of legal constraints, but also because women have different labor patterns then men (i.e., they’re more likely to work in informal settings), they contribute less (because they’re paid less) and they live longer. That means women make up the majority of the 73% of the world’s population with little or no social protection in old age.

And all that income women are losing to child care or domestic work adds up to a lot of money. The time women spend on unpaid work amounts to 39% of India’s GDP, 31% of Nicaragua’s GDP and 10% of Argentina’s GDP. Gender equality and economic growth are like squares and rectangles: gender equality leads to economic growth, but growth doesn’t always lead to equality.

The need for paid leave and affordable child care is well-trod ground in North America and Europe, leading to charges that those kinds of social policies are more for rich women than for poor ones. But this report is one of the first to link female-friendly workplace policies like those to gender equality in the developing world. Rich or poor, policies that help working mothers help elevate all women. 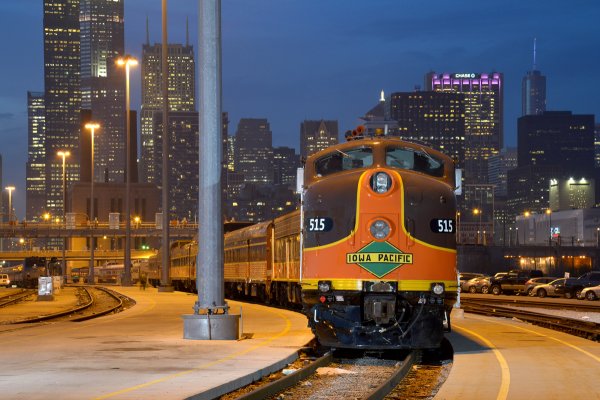 These Are America's Most Romantic Train Trips
Next Up: Editor's Pick