Apple Is Making Watches As Fast As It Can

“Right now, demand is greater than supply, so we’re working hard to remedy that,” Cook said of the Apple Watch in an earnings call Monday.

Cook’s comments came after Apple Chief Financial Officer Luca Maestri told Bloomberg the company is “working very, very hard to catch up from a supply standpoint — “keep in mind this is not only a new product but it’s an entirely new category.”

Apple didn’t give an official count for how many Apple Watches it has sold so far, but one estimate by research firm Slice Intelligence says shoppers pre-ordered 1.7 million units.

The Apple Watch launch has been an unusual one for the company. A two-week online preorder period began April 10, with the earliest shipping date advertised as April 24. However, many early orderers have reported considerably longer wait times for their shipments. And unlike with new iPhones, which are available on launch day in Apple’s retail locations and through mobile carriers like Verizon and AT&T, the Apple Watch is almost exclusively being sold through Apple’s online store.

Still, Apple has been apparently been playing a game of under-promise and over-deliver when it comes to Apple Watch shipment times. Many shoppers have reported via social media that their orders are shipping much earlier than Apple initially said would be the case.

“We were able to ship more watches during this past weekend than we had anticipated,” Cook said Monday. 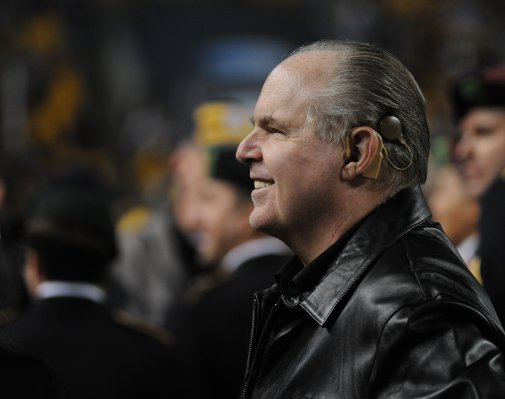 This is Rush Limbaugh’s Absolute Favorite Apple Watch Feature
Next Up: Editor's Pick