Here's Everything You Want to Know About Tuesday's State Dinner

Following a day of press conferences and pomp, the Obama’s will hold the dinner to “mirror the celebration of springtime in Washington, D.C..” The dinner itself is designed to show Japanese-American fusion, with guest chef Masharu Morimoto of Iron Chef fame, who was formally trained in Japan but grew to prominence at Nobu in New York.

It’ll be quite the affair, to say the least. And here’s everything you didn’t know you wanted to know about it.

The windows of 1600 Pennsylvania will be decorated with crystal curtains meant to embody both springtime rain and the fleeting beauty of the area’s cherry blossoms. Cherry blossoms have been sprucing up the National Mall at the beginning of spring since Japan gifted two trees to the United States in 1912. The more than 300 guests to Tuesday’s dinner will be served on new china outfitted with a band of “Kailua Blue,” chosen by the First Lady as a nod to the cool Pacific waters of Hawaii. The 11-piece setting also includes a recreation of decoration that appears on china purchased by President James Madison. The china will be used for the first time on Tuesday.

The Obamas will toast their guests with a round of Dassai 23 Junmai Daiginjo sake, a renowned brew of the rice-based alcohol. The first course is a “Toro Tartare and Caesar Sashimi Salad” that the White House says will come “wrapped in a clear acetate and tied with a Mizuhuki cord emulating a gift to be opened.” They’ll follow it up with a “Vegetable Consomme En Croute and Shikai Maki” and a Main Course of “American Wagyu Beef Tenderloin” served with spring vegetables and a 2010 Morlet Pinot Noir. For dessert, silken tofu and soymilk custard cake served with fresh fruit and syrup made from honey from the south grounds. They’ll end the meal with a “sip of tea,” a petit four formation styled in honor of Japanese tea and cherry blossoms.

The Obama’s will end Tuesday’s dinner party with a performance by the singers and stars of the Broadway hit-turned-film Jersey Boys. The film’s stars including Erich Bergen and Vincent Piazza will join John Lloyd Young, Michael Lomenda, and Tommy Faragher of stage productions in song.

TBD! The White House has not yet released the official guest list. 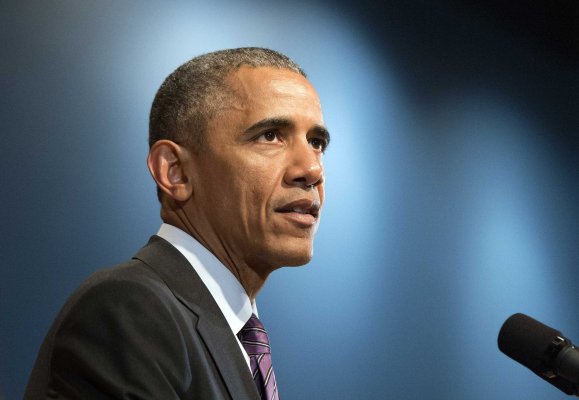 Hackers Read Some of Obama's Email, Report Says
Next Up: Editor's Pick