Medics Race Against Time to Save Nepal's Quake Survivors

Medical emergency responders are continuing to rush into Nepal as the country recovers from the immense earthquake that took thousands of lives. While the final death toll remains unknown—the Nepali Prime Minister said today some 10,000 may have died—medical aid groups say the timeframe is tight to save lives.

“There’s a very narrow window of opportunity for people suffering from major traumatic injuries to receive the care they need. It’s vital that people start to receive that kind of care within the first 10 to 14 days of the emergency,” says Paul Garwood, a communications officer at the World Health Organization. “The general rule is that for every one person killed in a disaster like this, some three people are suffering from major trauma injuries.” As time goes on, the risk they die from their injuries increases, he says.

Medical responders tell TIME that survivors’ injuries range from broken bones to head trauma to spinal injuries, and they require intensive and rapid medical treatment and many will require surgical interventions. “These are the major injuries we are seeing now and expect to be seeing in the thousands,” says Garwood.

Responders are also trying to get care to people in the rural affected areas that are still isolated. “We are extremely concerned about people in villages that we can’t reach. The people can’t get out by their own means,” says Patrick Fuller an International Federation of Red Cross and Red Crescent Societies (IFRC) spokesman currently in Kathmandu. “There are thousands of people who have lost everything.”

At the same time, other health challenges don’t go away just because there’s been a major earthquake. Doctors need to maintain routine medical care for people with preexisting conditions or pregnant mothers who may be giving birth. The WHO says it’s working to ensure the right quantities of medicine are available to treat people who require care for diabetes, cancer and heart disease, for example.

Dr. Poonam Khetrapal Singh, WHO regional director for South-East Asia says her teams are trying to anticipate public health needs before they present themselves. She has team members preparing for the possibility of a measles outbreak and an increased need for mental health care among survivors. “Even now I find that people are traumatized,” she says. “At the moment the devastation is just so much.”

Teams from Doctors Without Borders/Médecins Sans Frontières (MSF) have has arrived in Nepal and are currently assessing medical needs and sending surgical teams throughout the affected areas. An 11-member surgical team was sent to Kathmandu with a “rapid intervention surgical kit,” allowing the responders to start performing operations within 72 hours after the earthquake.

In a natural disaster, there’s additional environmental factors that can jeopardize human recovery. Supply systems like roads can become disrupted and access to food can become an issue. Loss of water and sanitation systems can create risks for communicable diseases. Fuller says many shops and markets are closed and food is becoming quite scarce. “In the aftermath of the earthquake, there is the danger of epidemics breaking out, including cholera, malaria and typhoid fever. Landslides and heavy rains pose a risk to people forced to sleep out in the open,” MSF said in a statement.

“We understand that monsoonal rain has come early in Nepal, so excess amounts of water and displaced populations accentuate the risk of communicable disease outbreaks,” added Garwood. The WHO says its sending medicines to deal with diarrheal disease outbreaks. The hope is that if such infectious disease arise, as they have in past emergencies, they can be contained.

“The greatest concern is speed,” says IFRC’s Fuller. “We have to reach them as quickly as possible.” 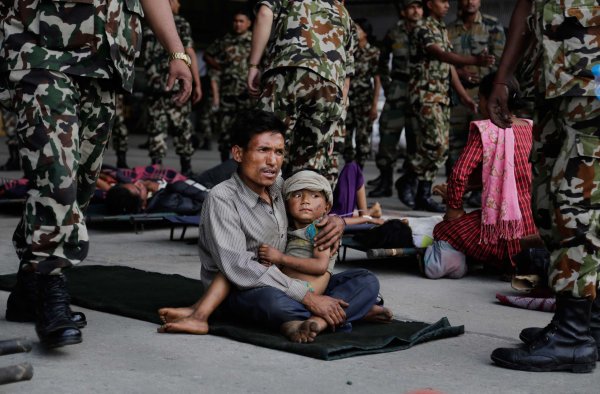