Hundreds of mourners attended an often emotional funeral on Monday for Freddie Gray, the 25-year-old man whose death in police custody on April 19 has ignited protests around the city and spurred calls for police reforms.

Along with the prayers and sermons came calls for change. Billy Murphy, the Gray family’s lawyer, urged the police to adopt body cameras. Maryland Democratic Rep. Elijah Cummings said Baltimore would not rest until incidents like Freddie Gray’s death no longer happened. Rev. Jesse Jackson reminded those attending that “the White House is watching. The whole world is watching,” while saying that violence distracts the city from making real change.

Jackson also urged officials to focus on bringing change to low-income neighborhoods like the one surrounding Gilmor Homes, where Gray was arrested on April 12. He died a week later from a severe spinal injury.

The most dramatic moments at Monday’s ceremony came from Jamal Bryant, a prominent Baltimore preacher, who electrified those in attendance by pledging that “Freddie’s dead is not in vain.”

“After this day, we’re going to keep on marching,” Bryant said, urging the city’s young black men to take action to help change some of the city’s most impoverished neighborhoods. “I don’t know how you can be black in America and be silent.” He finished by leading a call-and-response of “No justice, no peace,” which the city’s protesters have routinely chanted.

Will Perkins, a 28-year-old resident of West Baltimore who attended the funeral to “be a part of it”, said that the violent protests seen on television in the last few days represented only a small fraction of the mostly peaceful demonstrations throughout the city.

He described the relationship between police officers and residents of his West Baltimore neighborhood as essentially non-existent. “There’s no communication between police and the community,” he said. “They’re not helping us. They don’t get out of their cars. They don’t help. And I feel like if it doesn’t change, it’s going to be a riot. If nothing good comes out of this, then it’s going to get bad.” 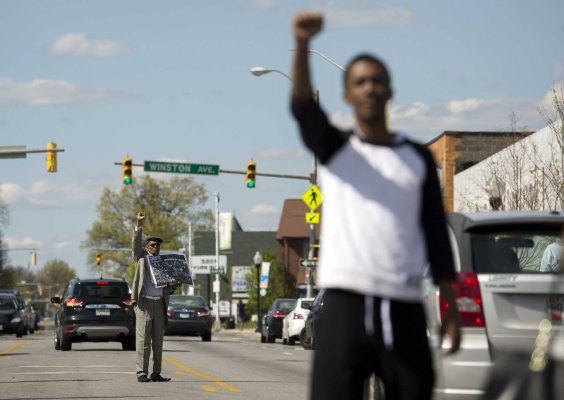 Baltimore Calm After Protests
Next Up: Editor's Pick