Celebrations on May 1 have long had two, seemingly contradictory meanings. On one hand, May Day is known for maypoles, flowers and welcoming the spring. On the other hand, it’s a day of worker solidarity and protest; though the U.S. observes its official Labor Day in September, many countries will celebrate Labor Day on Monday.

How did that happen?

Like so many historical twists, by complete accident. As TIME explained in 1929, “To old-fashioned people, May Day means flowers, grass, picnics, children, clean frocks. To up-and-doing Socialists and Communists it means speechmaking, parading, bombs, brickbats, conscientious violence. This connotation dates back to May Day, 1886, when some 200,000 U. S. workmen engineered a nationwide strike for an eight-hour day.”

The May 1, 1886, labor action wasn’t just any strike—it was part of what became known as the Haymarket affair. On May 1 of that year, Chicago (along with other cities) was the site of a major union demonstration in support of the eight-hour workday. The Chicago protests were meant to be part of several days of action. On May 3, a strike at the McCormick Reaper plant in the city turned violent; the next day, a peaceful meeting at Haymarket Square became even more so. Here’s how TIME summed it up in 1938:

In 1889, the International Socialist Conference declared that, in commemoration of the Haymarket affair, May 1 would be an international holiday for labor, now known in many places as International Workers’ Day.

In the U.S., that holiday came in for particular contempt during the anti-communist fervor of the early Cold War. In July of 1958, President Eisenhower signed a resolution named May 1 “Loyalty Day” in an attempt to avoid any hint of solidarity with the “workers of the world” on May Day. The resolution declared that it would be “a special day for the reaffirmation of loyalty to the United States of America and for the recognition of the heritage of American freedom.” 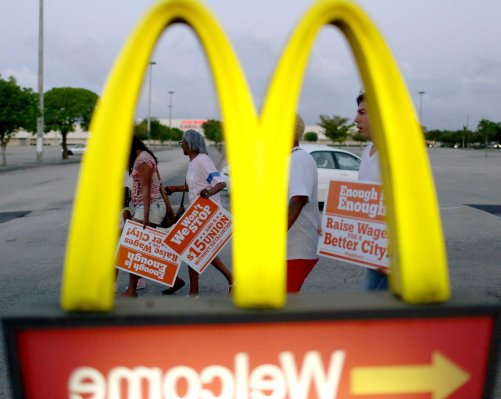