How Intel and Boeing Are Helping These Kids Learn STEM Skills

As a tech analyst, one of the areas I’m highly interested in is STEM (science, technology, engineering and math) education. I have written columns in TIME about why the San Francisco 49ers and Chevron are willing to spend millions of dollars getting kids up to speed on STEM. Their central goal is to help kids prepare for a world where technology has become pervasive, one where there will be a need for millions of STEM-educated students to work for and run all types of companies around the world.

I was recently told about an entire region in Arizona that has made education — and especially STEM education — a core tenet of its economic development strategy. A few weeks ago, I had the privilege of going to Phoenix and attending what was called the PHX East Valley THRIVE Economic Diversity Summit. It was sponsored by what is known as the PHX East Valley Partnership, which encompasses Tempe, Mesa, Chandler, Queen Creek, Apache Junction, Gilbert and Scottsdale.

This partnership was created in 1982 as a 501(c)(6) nonpartisan coalition of civic, business, educational and political leaders dedicated to the economic development and promotion of the East Valley of Greater Phoenix. The group advocates for improvements in areas such as economic development, education, transportation and infrastructure, arts, healthcare, and other important areas.

The PHX East Valley Partnership is led by the energetic Roc Arnett, who serves as its president and CEO and is quite a visionary when it comes to leading this group of cities and helping them expand their overall economic fortunes. In my many discussions with Mr. Arnett during the event, he kept coming back to the importance that education plays in his region and how he, along with the mayors of the six cities involved, are highly dedicated to making education and STEM-related programs a fundamental emphasis of many of the companies in this area.

According to Gilbert, Arizona Mayor John Lewis: “[The] presence of firms like Intel, Orbital, Boeing, Lockheed Martin and Banner MD Anderson in the Phoenix East Valley, coupled with an emerging pipeline of technologies and a specialized workforce from state universities, solidify the region’s competitiveness for rapidly growing science, technology, engineering, and math (STEM) occupations. Our communities are working together with the world class companies and educational institutions in our region to ensure the most educated workforce is ready for our future.”

The first company involved in the partnership I met with was Boeing. Its facility in Mesa, Arizona produces the Apache helicopter and supports other Boeing-related projects around the world. Boeing’s STEM-related program is called “Engineering is Elementary.” According to Boeing officials, Engineering is Elementary is a professional development program for pre-K, kindergarten, elementary and middle school teachers, initially developed by the Museum of Science in Boston. It’s designed to foster students’ understanding of engineering and technology, with a goal of boosting students’ problem-solving abilities in STEM. The program, supported by Boeing grants to the Mesa School District since 2012, has impacted 530 teachers and 16,875 students in 66 Mesa schools.

“Boeing has a strategic community focus to increase teacher effectiveness in math and science and to attract more students into STEM-related careers,” said Mary Baldwin, Arizona community investor for Boeing Global Corporate Citizenship. “Engineering is Elementary provides teachers and students a greater understanding of engineering, and it accomplishes that in a fun, interactive way. Our goal is to interest students in engineering at an early age and increase the number of scientists and engineers for Arizona’s future workforce.”

I also met with Intel officials at the company’s Chandler, Arizona facility to hear about their STEM efforts. Intel invests $100 million worldwide in various educational programs, many which are STEM-related. According to Jason Bagley, Government Affairs Manager for Intel’s Southwestern U.S. region, Intel’s educational charter is “to grow engineers, but it is also about helping society become more tech literate in terms of the types of issues that people need to deal with around climate change, healthcare, and understanding how to interact with all forms of digital information.”

This first pilot activity inspired Cheryl Dalsin, who is a technical program manager in Intel’s supply chain group, to incorporate concepts from her professional field of supply chain into the program. She developed hands-on activities that simulate real-world supply chain principles – source, make, deliver, reuse/recycle – as well as manufacturing challenges and STEM principles. Younger students began by making lemonade – they learned what makes a good supplier, and what happens when a supplier can’t deliver on time, or at all. They go on to build LEGO cars using a bill of materials and design constraints. They use wild cards describing good or bad scenarios that add an element of the unknown that every supply chain professional must learn to handle. The program has grown to reach more than 10,000 students in five U.S. states, three Asian countries, and is under development in Ireland.

I love the way many tech companies are backing STEM, seeing it as critical for their future. But a regional focus on education and especially STEM, like the one that is organized and promoted by the PHX East Valley Partnership, should become a model for many cities and municipalities in the U.S. to make sure we have enough STEM-educated students to meet the forthcoming demands of all types of companies around the world in the near future. 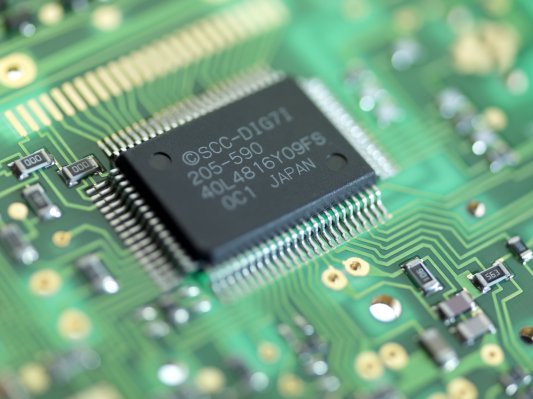 All Your Modern Technology Is Thanks to This 50-Year-Old Law
Next Up: Editor's Pick