Where Will the Next Big Earthquake Hit?

Search and rescue team work among the debris of houses after a powerful earthquake hits Katmandu, Nepal on April 26, 2015.
Sunil Pradhan—Anadolu Agency/Getty Images
By Helen Regan

For years, seismic experts predicted that a big earthquake would hit the Himalayan region between India and Nepal.

The Himalayas are being pushed upwards at the rate of about one centimeter a year as the Indian subcontinent smashes against the Eurasian plate— a process that has been ongoing for millions for years. As the plates thrust against each other huge amounts of pressure builds up until it releases as an earthquake.

The region experiences a magnitude-8 earthquake approximately every 75 years, with the last in 1934. It killed about 10,000 people.

Though it’s impossible to predict exactly when or where big earthquakes will happen, areas where seismic activity meet underdevelopment and poverty are prone to the most devastation.

The consequences of substandard building and a lack of earthquake preparedness were seen in devastating force in Saturday’s 7.8 magnitude earthquake near Kathmandu. Scores of structures collapsed and more than 3,600 lives were lost.

Kumar warns that other cities and towns in Nepal, as well as several in India, Pakistan and Bhutan, are at high risk of a similar disaster due to the activity of the tectonic faults underneath them and their lack of preparation.

“It is not as though Nepal didn’t know about the problem, but that it was so huge they didn’t know where to start,” Kumar says, adding that the country lacked the resources and technical expertise to make existing buildings resistant to earthquakes (a process known as seismic retrofitting). “The government was working against time.”

According to Brian Tucker, the president of GeoHazards, the U.S., New Zealand, Japan, Turkey (particularly Istanbul) and Chile are all high-risk countries where tectonic plates are under strain but they have taken steps to prepare buildings and educate the people in order to mitigate the consequences of a big quake.

“Places you would really shudder to think what would happen are Tehran, Iran; Karachi, Pakistan; Padang, Indonesia and Lima, Peru,” he tells TIME. “If you ask me to place a bet on where the next big earthquake would be, the strongest evidence is offshore Sumatra.”

In 2004, a 9.3 magnitude earthquake struck 100 miles off the northwest tip of Sumatra, Indonesia generating a huge tsunami that killed some 230,000 people and cause widespread devastation.

“Padang is much smaller than Kathmandu so it wouldn’t create the same economic or political chaos that one in Tehran, Karachi or Istanbul would cause,” he said, but he stressed that an earthquake there could trigger a tsunami with similar devastating consequences.

Rapid migration from rural areas to cities worldwide has meant buildings in many cities with poor economies have sprung up quickly to accommodate the new influx of people.

“They don’t have resources to rebuild all the schools, hospitals, houses and apartments according to good building practice,” says Tucker.

Assessing the vulnerability of buildings such as schools and hospitals in these places will go a long way in preventing huge human and financial costs when a big quake strikes, he says. But “We need to create mechanisms to reward and incentivize the private sector to adhere to building codes.”

Read next: Here Are Six Ways you Can Give to Nepal Earthquake Relief 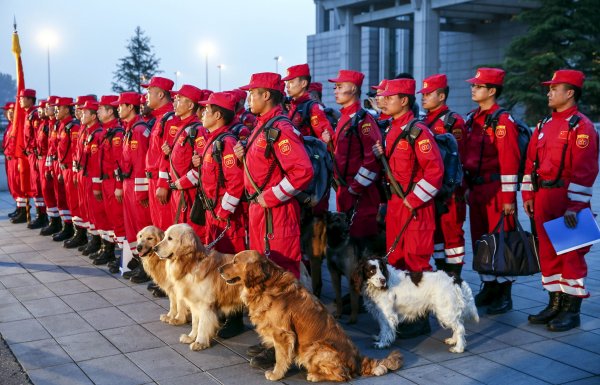 China Rushes Aid to Nepal After Deadly Earthquake; Taiwan Is Turned Away
Next Up: Editor's Pick