Cleveland Kidnap Victims Recount How Ariel Castro Could Have Been Stopped

Hope: A Memoir of Survival in Cleveland, Amanda Berry and Gina DeJesus’s account of the years they spent trapped in kidnapper-rapist Ariel Castro’s house of horrors, hits shelves today. The book, written with Washington Post reporters Mary Jordan and Kevin Sullivan, is a terrifying portrait of a man who seems to hate women, and who has no understanding of his own crimes.

Over the course of several years, Castro lured victims into his car and then chained them up in his house, where he kept them until he was caught in 2013. Berry was kidnapped in 2003, while walking home from her job at Burger King, the day before her seventeenth birthday. DeJesus was taken in 2004, while she was walking home from seventh grade. A third, Michelle Knight, was taken in 2002 after leaving the home of a family member.

Hope goes into detail about what was reported after after the women escaped in May, 2013 — the atrocious rapes and beatings and the psychological torture that they endured are unimaginable on any level. Their understanding of Stockholm syndrome comes through episodes of Oprah; they cling, hopeful and helpless, to news of Jaycee Dugard’s release from a different kidnapper. They battle depression, sickness and bedbugs. They dream of killing their captor with rat poison. They see the disaster of Hurricane Katrina unfold on television. They also watch the 2008 presidential election returns, elated by Obama’s victory but fearful of Castro, who had banned television shows with black stars. But what is as striking as the sheer passage of time, and the incredible will of the women, are the number of times and ways Castro could have been stopped, and wasn’t.

Castro had a history of abuse long before he lured Knight into his car with the promise of a puppy. He beat his common-law wife Grimilda Figueroa so brutally that she grew a brain tumor from all the head injuries she suffered. One night in 1989, after Figueroa called the police on Castro, he threatened to kill her and take their kids if she pressed charges. Later, he stomped on her head with his boots on in front of their children, Figueroa decided to lodge a formal complaint. Castro’s case was brought before a grand jury in 1994, but he staked out the entrance to the courthouse and told Figueroa he would kill her and their kids if she testified. She never went to the stand, and the grand jury declined to indict him, citing insufficient evidence. Like many domestic abusers, Castro never served time for beating Figueroa.

Castro had many close calls during the decade-plus he kept prisoners in his home. He had guests in and out of his home, including his family, who apparently never suspected anything. In 2004, Angie Castro, Ariel’s daughter (and the older sister of Arlene Castro, who was friends with DeJesus and was the last person to see her before she disappeared), got a strange message on her answering machine. The message, an apparent pocket-dial, included the voice of a terrified young woman screaming, “Get away from me!” Angie reported the call to the police, but the FBI traced it to a different phone; DeJesus’s mother believes there may have been a mistake in the call tracing, and that the call actually came from inside Castro’s house.

The friendship between DeJesus and Arlene Castro also led to another close call for Castro. The police started looking into Arlene’s stepfather, Fernando Colon, as a suspect in Gina’s disappearance. Colon says he told the police they should look into Castro — he said that he told them Castro was violent and knew Gina, but that the police never followed up.

In 2008, Castro was pulled over on his motorcycle for having a loose license plate; the conversation with the officer was a cascade of lies, any of which could have been been picked apart, scrutinized, and a clue to more trouble. But the police officer, known as one of Cleveland’s toughest, wrote Castro two tickets and went on his way.

In 2010, the police raided the house next door to Castro’s, but the imprisoned women were too afraid to yell for help. In 2012, a man in prison falsely told authorities he had killed Berry, and that they could find the body at a site near where Berry was actually being held captive. As police began an excavation for the body, news crews filmed. One report actually featured Castro’s brother Pedro, who pointed to the dig site and said, “That’s a waste of money.”

Later, after Castro was finally arrested in 2013, he said the police could have gotten him right away if they’d been able to see surveillance footage from Wilbur Wright Middle School, where DeJesus was taken. “If they would have questioned me… it’s possible that it would have ended right there,” Castro said in court. “I feel that the FBI let those girls down.”

One of the most unnerving chapters of the book details how the women — and Castro — eagerly followed the news of Jaycee Dugard’s release from a similar captive existence in California. Of Dugard’s kidnapper, Castro said, “That guy was crazy.” Berry writes:

“We read more about Jaycee and I say, ‘This is just like what happened to me.’

‘It is similar, because she had the kids,’ [Castro] agrees. Then he looks at me and asks, ‘Are you going to write a book about this?'” 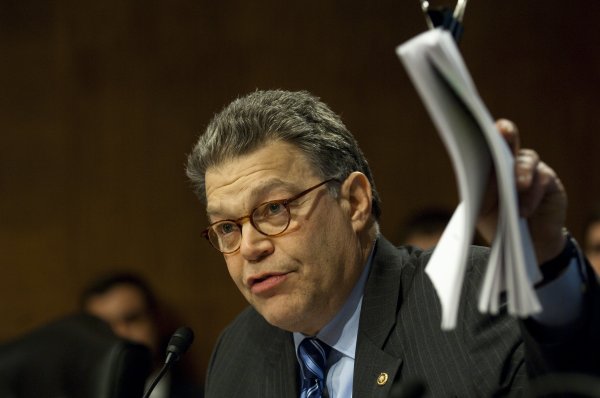 Politicians Didn't Stop the Comcast–Time Warner Deal. You Did
Next Up: Editor's Pick