NFL Hall of Famer Joe DeLamielleure talks about his recent diagnosis of a degenerative brain disease known as chronic traumatic encephalopathy, or CTE, in Charlotte, N.C., on Jan. 22, 2014.
Charlotte Observer—MCT via Getty Images
By Sean Gregory

Joe DeLamielleure is living with chronic traumatic encephalopathy (CTE), the degenerative brain disease associated with head trauma in football. Junior Seau and Dave Duerson are among the former NFL players who have committed suicide, and were later diagnosed with CTE. Officially, CTE can only diagnosed posthumously. But researchers affiliated with UCLA have developed a PET scan that they say can find signs of CTE – particularly the buildup of tau protein in the brain – in living players. DeLamielleure – along with fellow NFL Hall of Famer Tony Dorsett, former All-Pro Leonard Marshall, and a dozen other retired players who had sustained at least one concussion – underwent the UCLA test. Signs was CTE were discovered in their brains.

Symptoms of CTE include memory loss, depression, and mood swings. “I’m functioning pretty good right now,” says DeLamielleure, 64, who played 13 seasons, form 1973 to 1985, as an offensive lineman for the Buffalo Bills and Cleveland Browns. “That doesn’t mean, three years from now, the wheels don’t fall off.”

CTE is at the epicenter of the NFL’s head trauma crisis. Boston University researchers have examined the brains of 62 deceased NFL players: 59 of them have been diagnosed with CTE. But last week, a federal judge approved the financial settlement in the so-called concussion lawsuit between the NFL and its ex-players, and future CTE diagnoses were excluded from the agreement. Players who suffer from neurocognitive impairments, such as a decline in memory and processing speed, are eligible for awards up to $3 million. Parkinson’s and Alzheimer’s victims can get $3.5 million, while ALS victims are eligible for a $5 million max award. Families of players who have died of CTE can get $4 million, but only if the player has passed away prior to the final approval date of the settlement.

In her ruling that approved the settlement, federal judge Anita Brody wrote that she excluded future CTE cases because neurocognitive ailments associated with CTE are eligible for awards. So, in principle, victims of CTE could receive damages while they’re still living, as long as they are diagnosed with memory loss and other neurocognitive impairments. (Robert Stern, a leading CTE researcher from Boston University, has said that many of the CTE victims he has studied did not suffer such symptoms — and thus wouldn’t have been eligible for this award under the settlement).

Brody specifically excluded some of the behavioral symptoms of CTE, such as irritability, aggression, depression and suicidal tendencies, from the settlement. Going forward, Brody wrote that the families of players diagnosed with CTE after death are ineligible for an award because she did not want such a benefit to incentivize suicide, since researchers can only diagnose CTE posthumously. The settlement does account for the possibility that a nascent CTE-detection test, like the one at UCLA, will one day become an accepted method of diagnosing CTE in living players: Brody requires that the league and the players’ attorneys sit down in good faith every ten years to possibly modify the agreement to reflect advancements in CTE research.

That might be too late for DeLamielleure. His wife, Gerri, says he’s already starting to show some of the behavioral symptoms that are associated with CTE, but excluded from the settlement. “He’ll turn on a dime,” says Gerri DeLamiellure. “He’ll be fine, and the next minute, whatever happens, it just seems like he has flares of temper.” Some of DeLamiellure’s fellow ex-players are also disappointed with the agreement. “It’s a dodge,” says former Houston Oilers linebacker Gregg Bingham, 64. “Why did we have to turn to the judicial system for the NFL to do what common sense says the league should have done on its own?” says former quarterback Dan Pastorini, 65, who spent the bulk of his 12-year career with the Oilers. Both Bingham and Pastrioni opted out of the suit.

Former defensive back Bruce Laird didn’t. But he’s unhappy with the agreement. “One thing that really upsets me is that symptoms like mood changes and depression aren’t covered,” says Laird, 64. “I just hope none of my teammates get any money, because that means they’re in trouble. Even when you win, you lose.” 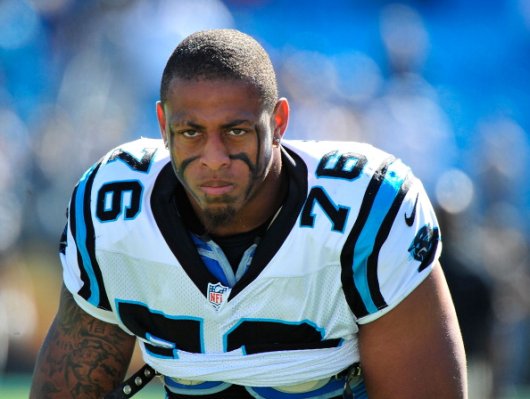