It’s no surprise that the episode named after an office building (and not just any office building — the one that’s currently home to TIME’s offices as well) is the episode that’s all about business. For once this season, it’s not just Peggy and Joan doing all the work, and it’s all thanks to the ominous SC&P overlords McCann-Erickson, who announce in “Time & Life” that they’re absorbing SC&P. Well, announce is probably too generous a word, as Roger and Joan only find out about the impending consolidation when somebody at McCann gives notice on the agency’s lease without actually telling anybody who actually works there.

After sharing a sweet moment — Joan rests her head on Roger’s shoulder in a way that evokes the warm fuzzy feelings of their romantic days, while still looking platonic — the partners and employees jump right into figuring out what the absorption means for their future. Will they be let go? Or stay on board? Do they even want to go over to McCann? Should they look for work elsewhere? Reactions are mixed. Ted, who’s mentally checked out of his work, if not his entire life, is relieved at the thought of joining a massive agency where he can remain checked out. Joan laments to her new lover Richard that she doubts her new employers will take her seriously or let her keep her accounts. Peggy, who confessed her career goals to Don just last week, starts to consider her options given the wrench lodged in her five-year-plan. Pete, who’s never worked anywhere else in his life, feels powerless about the move and resigns himself to going along. And don’t forget Lou Avery, who gives Don a big fat sayonara and heads to Japan to work on his oft-ridiculed cartoon before he can even find out about the news. While last year’s episodes hinted that there could be some undiscovered humanity underneath his general jerk-iness, Lou presumably bids farewell to Mad Men as a bigger cartoon character than the one he’s been peddling to studios this whole time.

Don, who bookends the episode trying to find out what happened to Diana, is the one that comes up with the big bold idea to secure their futures. Sensing the partners’ reluctance to go to McCann, he suggests they all move west to SC&P’s California office and start a wing of McCann that handles all the conflicts, or the companies McCann will have to drop because they’re already working with their competitors. All they have to do is convince enough of the biggest conflict clients to stay with them in order to show McCann it’s worth it to keep SC&P as a separate wing. That’s harder than it sounds thanks to Ken Cosgrove, who makes good on his promise to be the client from hell by telling Roger and Pete — the same guys who happily cut him loose him to satisfy McCann — that there’s no way he’d ever give them what they want. But like any episode of Mad Men that requires the gang to rally in the face of losing their company as they know it, the partners eventually do secure enough accounts — Burger Chef, Secor Laxatives, Sunkist, Tinkerbell cookies — and get ready to make their pitch.

But here’s the twist: McCann-Erickson absorbing SC&P is actually a better deal than they thought it was, at least according to Jim Hobart, who stops Don’s pitch halfway through to tell the partners they “passed the test” as an agency and that they’re about to get the best jobs in the whole advertising biz. They simply won’t entertain the idea of SC&P West. You can tell from the creepy way Hobart whispers “Coca-Cola” that the partners are supposed to be thrilled they still have a place at the company, but from the looks on their faces and their subsequent somber drinks outing that they’re anything but. “This is the beginning of something…not the end,” Don later tells the rest of the office, but from the way all the employees get up and leave mid-Draper speech, it’s obvious nobody believes the words coming out of his mouth. In fact, it doesn’t even seem like Don believes them, and he was the only partner who seemed to believe in promise of new beginnings and reinvention in California. Perhaps this is just Mad Men’s way of hinting that Don won’t find the redemption he’s been seeking in these last three weeks. Losing control of the company in this way could just part of the same fall that’s depicted over and over in the opening credits.

The most entertaining parts of this week’s episode, however, have little to do with Don and everything to do with Pete and Peggy, for entirely different reasons. “Time & Life” marks the return of Trudy Campbell (Alison Brie), who needs Pete’s help in pretending to be a happy, amiable divorced couple in order to get their daughter into the private school of their choice. Pretending isn’t that hard, as Pete and Trudy get along in a way that suggests a reconciliation isn’t out of the question, but their marital status was never the problem for little’s Tammy educational prospects. It’s her development — Tammy apparently failed her draw-a-man test after scribbling “only a head, a mustache, and a necktie” in what seems yet another of this episode’s meta jokes — and a longstanding rivalry between the headmaster’s family and the Campbells that doesn’t make much sense. It does result in Pete punching the guy in the face, though, which is probably the most exciting thing that could happen to Pete’s story arc besides Pete himself getting punched in the face.

What made Peggy so interesting this week also had to do with family. This season of Mad Men has long tip-toed around the child Peggy gave up for adoption — both the character and the show seemed to make subtle references to it — and tonight’s episode finally dove right into it. It was only a matter of time, and the appearance of small children early on this episode — and a scene between Pete and Peggy in a room full of them — warned viewers this episode was the one. Peggy is auditioning children for a new ad campaign, but it isn’t off to a great start considering she’s no natural with children. It shows when Stan tells her straight-up “You hate kids,” and it also shows when the two have to babysit a child actress left behind by her momager, who went to go pick up another kid from another audition. One bloody incident with the kid and a stapler later, and Peggy and the stage mom get into a shouting match: How could you let this happen to her? Well, how could you abandon your child at a random office? It’s satisfying to witness Peggy give somebody a piece of her mind, but Peggy doesn’t get to enjoy it once the guilt starts flooding in. What right does she have to judge a woman who left her kid behind, Peggy wonders, when she gave her own child up for adoption?

Those two things are apples and oranges if you ask me, but the confrontation prompts the episode’s most beautiful exchange. What starts off argumentative — Stan telling Peggy she wouldn’t be where she was today if she had had kids, Peggy telling him not to judge women for their choices — turns intimate in a way that has plenty of Mad Men fans wishing more sparks would fly between the two. They’re good enough friends now that Stan can tell she’s haunted by something, and there’s a palpable sense of relief when Peggy finally finds someone to talk to about the better life her kid must be having. But it’s also quite heartbreaking when she mentions how she doesn’t know the details of his whereabouts: “You’re not supposed to know, or else you can’t go on with your life,” she says, almost trying to convince herself that she is moving on despite how often Mad Men reminds her of that choice. Let’s hope for her sake — and maybe ours — that this rule gets broken. 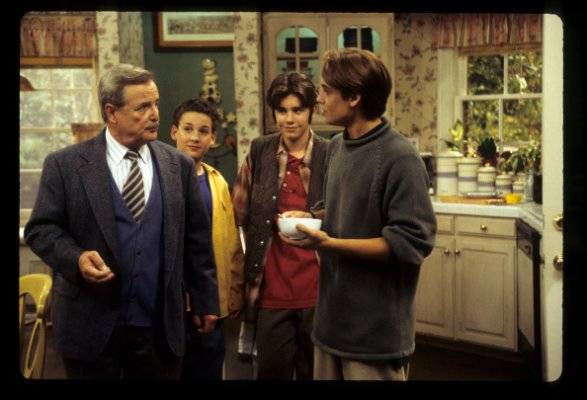