Late afternoon on Sunday, a rescue team that spent much of the day carefully combing through the rubble of a five-story building in suburban Kathmandu had a breakthrough.

Peeking through a gap in what was left of the roof, they saw a man trapped inside the collapsed structure in Sitapaila, just off Kathmandu’s ring road. The building, which once housed a church and some apartments, had gone from five floors to around one and a half on Saturday when a magnitude-7.8 earthquake struck nearly 50 miles outside Nepal’s capital, killing more than 4,000 people, according to latest figures Monday, and sending tremors throughout the region.

Amir Tamang, 32, was on the roof when rescuers reached the trapped man. Shortly after the earthquake, he learned that his father, two aunts, a sister-in-law, his 6-year-old niece and one of his closest friends had been attending a morning prayer service at the church when the ground began to move. The news throughout Sunday was tragic: rescuers recovered the bodies of four family members who were inside when the building toppled. Still, Amir remained hopeful the team would find his father and his friend.

So when rescuers made contact with the trapped man, Amir carefully moved across the roof to catch sight of the quake victim. He couldn’t see much, and the rescue team, which had been dispatched from India late on Saturday, couldn’t say anything about the trapped man’s identity or condition. They only had one task: get him out alive.

Amir’s story of tragedy and hope is among an untold number that are unfolding across this Himalayan nation as it deals with the aftermath of Saturday’s devastating quake, the country’s worst in 81 years. It was in 1934 when a magnitude-8.4 quake struck Nepal and the eastern Indian state of Bihar, killing nearly 11,000 people. In the wake of Saturday’s disaster, a number of countries have pledged support for rescue and relief efforts, and supplies and teams of rescue workers from India, China and Pakistan began arriving in the country as it began to dig out.

In Kathmandu on Sunday, hospitals were overwhelmed as patients streamed in, many of them in need of surgery for severe wounds. Dr. Santosh Poudil, an orthopedic and trauma surgeon at Kathmandu’s national trauma center, said a lack of resources was hampering the response at his hospital. Only one of its six operating rooms was functioning due to a combination of a rush of patients and a lack of supplies to keep all six of the rooms running simultaneously. The situation was “very difficult,” he told TIME. “Most severe cases are now in a queue for surgery.”

UNICEF said Sunday that nearly 1 million children across Nepal were in “urgent” need of humanitarian assistance. The death toll is expected to rise as more details emerge about the scale of devastation outside the capital.

“What you’re seeing in Kathmandu is only the tip of the iceberg,” Jamie McGoldrick, the resident representative in Nepal for the U.N. Development Programme, told TIME. “What’s happening in the areas northwest from here is quite significant damage.”

The earthquake damaged buildings and infrastructure in Kathmandu, across rural Nepal and in parts of India. It also triggered avalanches in the Himalayas; at least 18 people were killed by cascading snow and debris at the base camp on Mount Everest.

Kathmandu itself remains on edge, with a series of powerful aftershocks driving many of its 1.2 million people to seek shelter in the city’s parks, on its streets and in its roundabouts. As night fell Sunday, many residents prepared to spend a second night out in the open, fearful of what might happen when the ground shakes again.

Back in Sitapaila, after the breakthrough came a roadblock. Around an hour after the man’s sighting, and as Amir’s hopes rose, the operation was paused. Among other things, the man inside was partially trapped under a grill — possibly a part of what was once a staircase, according to one of the rescue-team members — but cutting him out was going to be tougher now that they realized the structure was less stable than it first seemed. They had to guard against upsetting the fragile balance between the displaced bricks, chipped plaster, mangled piping and other debris that was keeping what was left of the structure standing — and keeping the man from being crushed.

An ambulance that had been waiting in front of the building to rush the man to the hospital was ordered to move away. Space was made for the installation of lighting, as rescuers tried to work out how to save him without bringing down the entire broken edifice.

Amir was standing in front of the building when the operation hit the hurdle. “I still have faith,” he said. The news earlier in the day was “very painful.” But then, as the rescue team prepared to work into the night, he repeated, “I have faith.”

Read next: See the Most Dramatic Rescue From the Nepal Earthquake 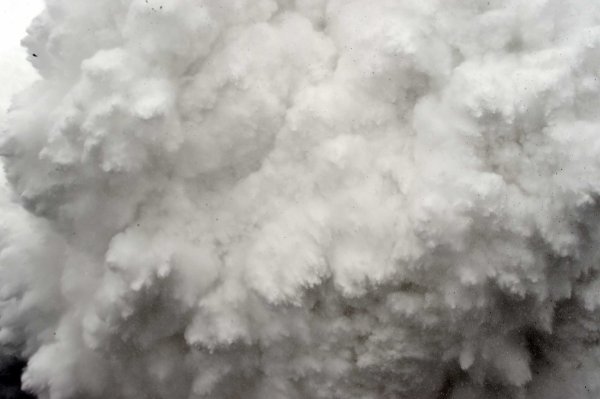 See Photos From a Survivor of the Mount Everest Avalanche
Next Up: Editor's Pick