Life and Death in One Picture After Quake Hits Nepal

Nepalese rescue personnel help a trapped earthquake survivor, center right, as his friend lies dead next to him in Swayambhu, in Kathmandu on April 26, 2015.
Prakash Mathema—AFP/Getty Images
By Olivier Laurent

The house built atop a hill in Swyambhu, a neighborhood west of Kathmandu’s city center, stood at three levels before Saturday. But it couldn’t resist the wrath of the 7.8-magnitude earthquake that struck outside of Nepal’s capital, killing more than 4,000 people and becoming the country’s worst quake in more than 80 years.

The earthquake flattened parts of the house, trapping two men side-by-side—one dead, the other alive—for more than 18 hours. Prakash Mathema, an Agence France-Presse photographer based in Kathmandu, was documenting the recovery efforts across the ravaged city when he heard that a rescue team had found the men.

“The top floor of the house had collapsed,” he told TIME on Sunday. “And the men were trapped by this beam.”

The house had been cordoned off, but Mathema requested access, aware of the risks. He entered by a window and shadowed rescuers as they worked to free the man who survived, identified as Saroj Shrestha. “It lasted seven to eight minutes,” he said.

Shrestha is now in a hospital with a broken leg, Mathema said. “I want to visit him,” he added, “but right now I have to document the rescue operations. I think it’s important [to show] what’s happening, what’s going on. There are a lot of places [in Kathmandu] where this has happened—people trapped in their houses. No one knows how many people are out there, [still alive] after 18 hours. The manpower is limited.”

Read next: The Story Behind the Photos of Nepal’s Devastating Earthquake 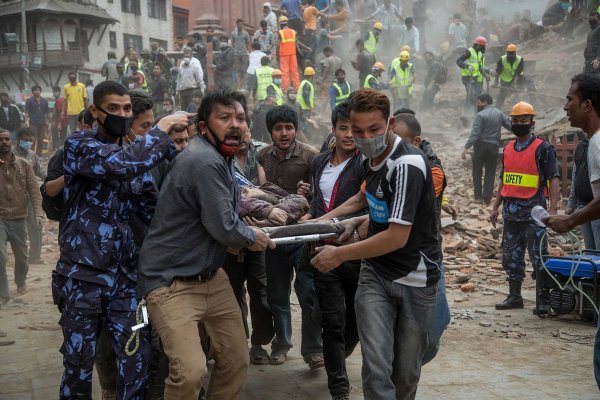 The Story Behind the Photos of Nepal's Devastating Earthquake
Next Up: Editor's Pick