A powerful earthquake measuring 7.8 on the Richter scale struck central Nepal on Saturday morning, damaging buildings in the country’s capital, Kathmandu, and sending tremors across northern India, Bangladesh and as far afield as Pakistan. At least 1,805 people were killed, the Associated Press reports.

The epicenter of the earthquake was located about 50 mi (80 km) northwest of Kathmandu, according to the U.S. Geological Survey (USGS), which said the quake struck Nepal just before noon at a shallow depth of only about 9 mi (15 km) belowground.

More than 6.6 million people are in the area affected by the earthquake, according to the U.N. Office for the Coordination of Humanitarian Affairs in Bangkok.

“I thought I was going to die,” photojournalist Narendra Shrestha tells TIME. “It was horrifying. How did I get out of this? This is my lucky day.”

Read more: See the Most Dramatic Rescue From the Nepal Earthquake

In Kathmandu, residents congregated on streets and other open areas as the USGS reported a series of powerful aftershocks. Buildings and temples collapsed, and roads across the city were cracked open by the quake. Kathmandu’s historic Dharahara tower—a nine story tall structure dating back to the 19th century—was brought down by the earthquake, with at least 50 people reportedly trapped in the rubble.

An avalanche near Mount Everest triggered by the earthquake killed at least 10 people, and buildings were reported to have been damaged across parts of northern India near the country’s border with Nepal.

“We need support from the various international agencies which are more knowledgeable and equipped to handle the kind of emergency we face now,” Nepal’s Information Minister Minendra Rijal told the BBC.

The U.S. is sending a disaster response team to Nepal and has released an initial $1 million to the country, and British authorities have been in close contact with Nepal over disaster relief.

Speaking to Reuters, Krishna Prasad Dhakal, the deputy head of Nepal’s embassy in New Delhi, said: “Hundreds of people are feared dead and there are reports of widespread damage to property. The devastation is not confined to some areas of Nepal. Almost the entire country has been hit.”

With the arrival of nightfall in Nepal, rescue workers struggled to find the most vulnerable people with no place to sleep as forecasts show the temperature dropping to 54 degrees Fahrenheit in the capital, and likely far colder in higher altitudes, the Guardian reports.

Nepal’s capital is located in the earthquake-prone Kathmandu Valley, where the last major disaster occurred in 1934. Then, nearly 11,000 people died when a magnitude 8.4 earthquake struck Nepal and the eastern Indian state of Bihar, which borders the Himalayan country.

Read more: Your City Might Not Be Ready for the Big Next Earthquake 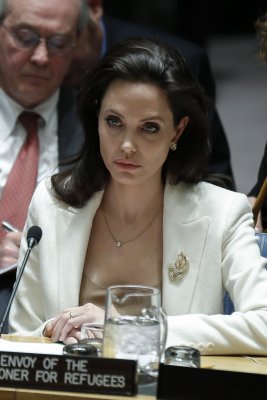 Watch Angelina Jolie Call on the U.N. to Save Lives in Syria
Next Up: Editor's Pick