The Execution of Several Foreigners in Indonesia Appears Imminent

In a sign that it may be preparing to put 10 mostly foreign drug offenders to death, Indonesia has asked foreign diplomats to travel Saturday to visit the maximum-security prison on the island of Nusakambangan where the inmates are being held.

According to Reuters, the legally required 72-hour notice has not been announced but a diplomat the news agency spoke with on condition of anonymity said, “We still don’t know when the actual date of the execution will happen but we expect that it will be in days.”

On Tuesday, through the state-owned news agency Antara, Indonesian President Joko Widodo said the executions were “only awaiting the conclusion of all procedures and the legal process, which I will not interfere in. It is only a matter of time.”

The condemned include Australian, Brazilian, French and Nigerian nationals, as well as a Filipina maid named Mary Jane Veloso who has sparked a social-media campaign for clemency.

Also set to be executed are the two Australian ringleaders of the Bali Nine drug-smuggling group, Andrew Chan and Myuran Sukumaran. Repeated appeals to spare their lives have been made by the Australian government and the case has created tensions between the two countries. France also blasted the Indonesian legal system on Thursday.

According to David McRae, a senior research fellow at the Asia Institute in the University of Melbourne, who wrote an analysis paper on the subject in 2012, Jakarta is torn between domestic and international considerations. “One [stream of thought] relishes the opportunity for the government to present itself as firm in the face of international pressure,” he tells TIME. “But I think there are others who are concerned at the prospect of Indonesia’s relations with various of its important international partners becoming mired in needless rancor.”

Indonesia has severe punishments for drug offenses and has once again started implementing the death penalty after a five-year stoppage.

Correction: The original version of this story incorrectly described the drug offenders. Nine are foreigners and one is Indonesian. 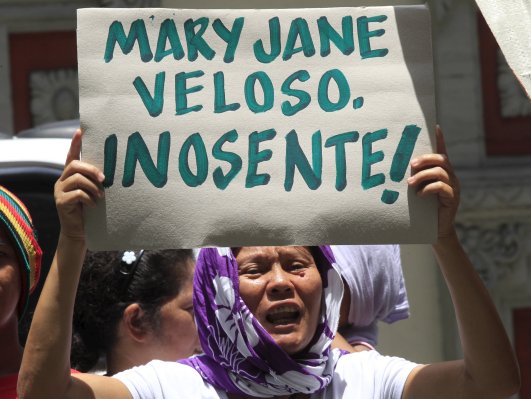 The Internet Is Begging Indonesia to Spare a Filipina's Life
Next Up: Editor's Pick