A protester holds a placard urging the Philippine and Indonesian governments to save Mary Jane Veloso, a Filipina facing execution in Indonesia, during a protest in front of the Indonesian embassy in Manila on April 24, 2015
Romeo Ranoco—Reuters
By Yenni Kwok

As the executions of 10 drug convicts loom in Indonesia, a massive social-media campaign has kicked off in support of Mary Jane Veloso, the Filipina maid set to face the firing squad.

The hashtag #MaryJane was the No. 2 trending topic on Indonesia’s Twittersphere on Friday morning, hours after Veloso was transferred to the execution island of Nusakambangan. As her family flew to the Indonesian city of Yogyakarta, where Veloso was held, Indonesians rallied to urge President Joko Widodo, popularly known as Jokowi, to spare the life of the 30-year-old migrant worker.

Indonesian celebrity chef Rahung Nasution launched a tweet storm on Friday morning, detailing how Veloso ended up in an Indonesian prison and how the Indonesian government handled her case. “Jokowi is not battling drugs. He is executing poor women, like the migrant workers in Saudi Arabia!! #MaryJane,” Rahung tweeted, referring to the two Indonesian domestic workers executed in the Middle East country last week.

Dewi Candraningrum, the chief editor of feminist magazine Jurnal Perempuan (Women’s Journal), uploaded her charcoal-on-paper drawing Mary Jane and tweeted, “She is a victim of trafficking. Is my President a murderer?” The National Commission on Violence Against Women also posted a series of tweets on why the government should not execute Veloso.

One Twitter user wrote, “I agree with death penalty for drug cases, as long as it’s for big-time drug dealers, not couriers or duped victims like #MaryJane.”

Another tweeted, “Sorry for #MaryJane how is it possible for a victim of a drug dealer is sentenced to death. As if people’s life is a plaything.”

While local support for other foreign drug convicts has been muted, there is a wider sympathy toward Veloso, a single mother of two, who said she was not a drug dealer but a victim of trafficking and was duped into carrying narcotics into the country. She was initially promised a job in Malaysia, but upon arrival there, she was told her job was in Indonesia. While in Malaysia, the drugs were secretly sewn into a suitcase she was lent, her family said. She was arrested at Yogyakarta airport in April 2010 after authorities found 2.6 kg of heroin in her suitcase. She was found guilty and sentenced to death later that year.

Veloso launched her first appeal in March, questioning the competence of the translator provided to her during the trial, but it was rejected by the Indonesian Supreme Court. She was transferred from Yogyakarta’s prison to Nusakambangan execution island at 1 a.m. on Friday.

On Friday, the Philippine government filed a second appeal for judicial review on behalf of Veloso in another attempt to save her life. 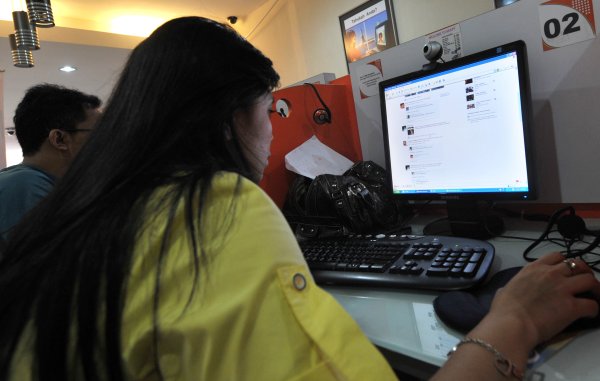 Indonesia's Internet Defamation Law Is Shockingly Broad and Draconian
Next Up: Editor's Pick