Three more women have publicly come forward with accusations that Bill Cosby sexually assaulted them in the 1970s and 80s, when they were in their 20s. The trio of women, including a former Reno bartender, joined the more than 40 women who said they were drugged or sexually assaulted by the comedian.

At a press conference Thursday, civil-rights attorney Gloria Allred, who is representing the accusers, said they are speaking out now because Cosby still refuses to “acknowledge and take responsibility for his conduct towards women.”

In addition, she said, Cosby, who has never been charged over any of the allegations and denies any wrongdoing, continues to perform his “Far From Finished” concert tour “as though the allegations against him by more than 40 women mean nothing and should be disregarded.”

Janice Baker-Kinney claimed she was working as a bartender at Harrah’s in Reno, Nevada, when Cosby allegedly drugged and sexually assaulted her at a house owned by the casino in May of 1982.

On the night of the alleged assault, Kinney, who was 24 at the time, said a friend invited her to the house for a “pizza party.” There, she says Cosby offered her two pills. “I thought it must be OK,” she said. “Bill Cosby said it was.”

She woke up later in the living room area on the couch with her jeans unzipped and her blouse opened and remembered Cosby bringing her upstairs to the bedroom.

The following morning, she woke up next to a naked Cosby who was touching her belly and genital area. She said she quickly got dressed and before she walked out the front door Cosby allegedly said: “‘this is between you and me’ and he put his finger to his mouth like a ‘shhhh’ sign.”

Marcella Tate told reporters she was victimized at the Playboy Mansion in Chicago in 1975 when she was a 27-year-old model with Wilhelmina Agency.

Tate said she met Cosby on a couple of occasions with friends for lunch and drinks when he called her up and asked her to pick him up at the airport.

“When we arrived at the Playboy Mansion he asked if I would like to see the mansion and have a glass of wine before I left,” she said. “Mr. Cosby brought me a drink and that was my last clear memory. The next cloudy memory I have is that I was in a different room. I was in bed. Bill Cosby was next to me and it didn’t appear he was wearing anything.”

The third alleged victim, Autumn Burns, said she was a 20-year-old game starter at the Sahara in Las Vegas and a fashion model in the early 1970s when Cosby approached her and told her he could get her gigs as a model and actress. One night, she claimed, Cosby gave her $500 to gamble and after his performance invited her up to his suite where he made her a scotch on the rocks.

“I felt woozy and he asked me to come into the bedroom,” she said. While in the bedroom, she claimed he sexually assaulted her.

Allred says protests are planned for Cosby’s next show at the Cobb Centre in Atlanta, Georgia, on May 2. 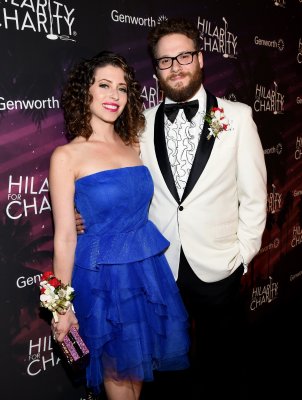 Seth Rogen Says Government Needs to Step Up On Alzheimer's
Next Up: Editor's Pick