Toward the start of Fast Five — fifth and best in the series that began with The Fast and the Furious in 2001 — Brian (Paul Walker) is in a freight train and Dom (Vin Diesel) is steering a 1966 Corvette Grand Sport alongside it. At the last possible moment before the train goes through a bridge over a river, Brian jumps from the train and lands on the Corvette, which Dom then drives off a, like, million-foot cliff. As the car plummets down the ravine, our guys jump out and land safely in the water.

Toward the end of Fast Five, Dom and Brian and their gang have pulled the ultimate bank-vault heist: instead of breaking into the vault, which holds like a quillion dollars in drug money, they hijack it by yanking it from its moorings with heavy cables attached to two police cars the guys have stolen. With half of the actual Rio police force in pursuit, the pull the giant piggy bank through street traffic, totaling nearly every other car in their way and creating collateral damage on a near-holocaustal scale — as if the Brazilian beach resort were Tokyo in a ’50s monster movie, and the vault were Goldzilla.

In a film that is sure to blast open the box-office vault this weekend, these two amazing chase scenes provide a little epiphany about modern movies. It’s this: in the kind of picture Hollywood makes best, the old cinema verities — sharp dialogue, rounded characters, subtle acting, a certain camera eloquence — are irrelevant. In a movie like Fast Five, the screenwriter (Chris Thompson) is less important than the stuntwriter, who dreams up action sequences of a dazzling complexity; and the director (Justin Lin) matters less than the second-unit director, who brings those destructo-fantasies to thrilling kinetic life. In Fast Five, everything’s in a hurry; even the English-language subtitles for the Portuguese dialogue scoot onto and off the screen. The film’s makers know that action is the one essential in this, the post-human era of movies.

Honestly, that’s fine. Throughout its 100-plus-year history, cinema has added some elements, jettisoned others, and what is lost is soon forgotten. When talking pictures arrived, silent movie fans decried the chattering and missed the mighty Wurlitzer organ, but few do today. The switch to color disappointed all those who loved the pearly tones of black and white; but nobody wants Avatar or Inception in monochrome. Into the dustbin of film history you may now throw characters worth caring about. What you’re left with is cars that career and crash.

(See pictures of American muscle cars in the movies.)

The new is, of course, old. The essential properties of the medium are movement and collision; and, from its infancy, history’s first fully mechanical art form offered its astonished spectators motion pictures of other machines. In 1896 the Lumière brothers showed a short film of a train pulling into a French railway station; the sight panicked its viewers, who thought the train would come off the screen and run them over. In 1903 came the epochal heist of Edwin S. Porter’s The Great Train Robbery in 1903; and, beginning in 1912, the auto carnage of Mack Sennett’s Keystone Kops, speeding down the streets of a new metropolis known as Los Angeles. A century later, the most popular movies (the Iron Man and Transformers series) celebrate other machines. But Fast Five goes back to basics — with another train robbery, and vehicular violence in police vehicles on city streets — just souped up and stripped down like a stock car in a death race.

Post-human action movies, like films from any other genre, can be crap. But when they work, they stoke an exhilaration that obviates the need for sensitive characters. Fast Five‘s “characters” are no more realistic than creatures in a video game; each figure has one defining trait, tops. Dom is a curt, righteous slab of meat; Brian is the more cautious yang to Dom’s yin; Mia (Jordana Brewster), Brian’s girlfriend and Dom’s sister, is there to be pretty and get in trouble or, here, pregnant.

The other members of the gang Dom has assembled for the vault caper — all veterans of previous Fast and Furious episodes — have some special skill; what they do is who they are. By mid-movie the number of familiar faces (for the record: Tyrese Gibson, Chris “Ludacris” Bridges, Matt Schulze, Sung Kang, Gal Gadot, Tego Calderon and Don Omar) has added up to 10, just one short of the team in Ocean’s Eleven, whose plot ingenuity Fast Five both mimics and easily surpasses. For a glimpse of the 11th member, stick around through the closing credits, where Eva Mendes, from 2 Fast 2 Furious, makes a brief appearance and reveals yet another mystery guest, thought to be dead — thus setting up a sixth and possibly seventh installment.

To justify its destruction of a major city, Five insists that the movie’s chief drug-lord villain (Joaquim de Almeida) controls virtually the entire police force and hundreds of favela. But the series also mainlines new blood by introducing two adversaries on the right side of the law: Hobbs (Dwayne Johnson), a DEA officer who’s chased Dom and Brian down to Rio, and Elena (Elsa Pataky), the one honest local cop. Pataky, a winsome presence, will move into the Dom’s-girlfriend slot vacated by Michelle Rodriguez at the end of the last film, Fast & Furious. And Johnson, an even more impressive cut of beefcake than Diesel, is destined to wrestle Dom in an ultimate fighting championship bout (which slows things down a little in the later reels, but, hey, didn’t Alien have to battle Predator?). He also gets his own hair stylist — a neat trick, since like Diesel he sports a shaved head — and, in this PG-13 film sole use of the f-word. Both new stars fit in fine; expect them to make return visits.

Fast Five occasionally wades into crime-film clichés, like the bad-guy sharpshooters whose bullets hit only the supporting players. And just to let Diesel and Walker pretend they’re actors, the director gives them a scene where Dom and Brian reminisce soggily about their respective dads; it plays like product placement for the Fatherhood Council and should come with a title card reading “Popcorn Break.” Environmentalists could also complain that Fast Five, which spills more fuel than BP in the Gulf of Mexico, is the least green movie ever. But these are minor lapses in a movie with exploding toilets, cars that move sideways and a big chase sequence with Walker and Brewster fleeing favela goons by crashing through the tin roofs of shanty-town shacks. There’s also a helpful how-to in getting a mob boss’s hand print for vault ID: dress the luscious Gadot in a skimpy swimsuit and have her walk her past the boss — he’ll naturally pat her butt, and she’ll have the print on her bikini bottom.

The movie is full of such moments of low genius. That’s why Hollywood’s young-male audience, which has been boycotting movies for the last few months, will show up in droves for Fast Five and go back in droves. The promise in the ads — “Summer begins April 29” — is no idle boast: the picture delivers the high-octane, testosteronic goods of a warm-weather smash, and maybe the first great film of the post-human era. It’s just a shame that every theater showing this nonstop auto race, this animated car-toon, can’t be a drive-in. 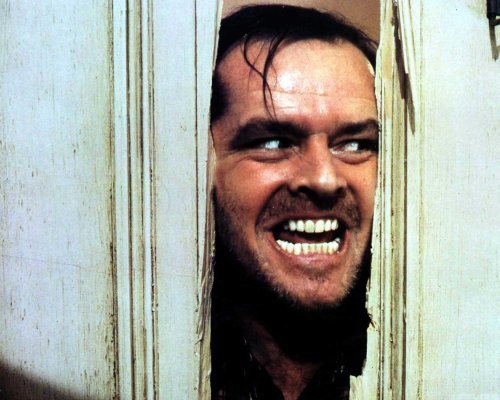 The Top 10 Ways to Survive a Horror Movie
Next Up: Editor's Pick