Barack Obama speaks at a ceremony at CIA headquarters in McLean, Va. on April 24, 2015.
Kevin Dietsch—dpa/Corbis
By Alex Rogers

Republicans in Congress are poised to give President Obama broad powers to cement a legacy-defining free trade deal with Pacific countries.

Backed by major conservative and business groups, bills to grant the president fast-track authority passed through Republican-led House and Senate committees last week with enough Senate Democratic support for eventual passage, unless the bill changes dramatically on its way to a final vote or Republican support crumbles.

Not every member of the GOP on Capitol Hill is gung ho about the idea. It’s unclear exactly how many, but estimates of GOP opponents range from as few as a dozen to two dozen to as many as 60, according to various news reports. The lower estimates are likely not enough, but the higher ones could sink the bill, which is designed to allow Obama to sign the Trans Pacific Partnership, a 12-country trade deal that would affect about a third of the world’s trade.

Critics fear that fast-track authority would further exacerbate income inequality and cut deeper into a manufacturing sector that bled millions of jobs last decade. Ohio Rep. David Joyce said he doesn’t understand why his fellow Republicans support trade promotion authority (or TPA) — which would limit debate in Congress by allowing the president to negotiate deals that could only be voted up or down without amendment — when they oppose Obama’s negotiations on Iran’s nuclear weapons program.

“I find it sort of humorous that they don’t trust the president on Iran or anything else but they’ll trust him with TPA, which I think could really do severe damage to our country and to manufacturing as a whole,” says Joyce, who counts himself among about a dozen GOP opponents.

Tucked in between Cleveland and Akron and spread into the northeast tip of the state, Joyce’s district boasts a manufacturing economy composed of 1,500 companies responsible for around 65,400 jobs and $930 million in wages, according to his office. “I never believed the president had this authority to begin with,” says Joyce. “So you start with that premise. And then in the last 28 months as I’ve worked the district, I’ve learned more and more manufacturers say this just hasn’t worked for us.”

Some pro-trade economists criticize opponents like Joyce for listening to politically active but less important sectors of their state. Two of the top five industries that gave the most money to Joyce’s reelection campaign last year were manufacturing companies and transportation unions, according to the Center for Responsive Politics. And while the manufacturing sector employs about 13 percent of his state’s workforce, Ohio Democratic Sen. Sherrod Brown, a fierce TPA opponent, tells TIME that the industry “matters to us as much or more than other state in the country.”

“I’m sure Ohio thinks of itself as a manufacturing state,” says Gary Clyde Hufbauer, senior fellow at the Peterson Institute for International Economics. “It’s not. Nobody is today. Manufacturing is down to about 11% of employment in the U.S.”

“There are many strong service industries in the US which will export abroad who are totally underrepresented in the political debate,” he adds. “The political debate is all centered on manufacturing and agriculture. And services, which is two thirds of our economy, is pretty well forgotten.”

The TPP deal the Administration has been negotiating for nearly five years would affect a broad swath of international law concerning a host of issues including those concerning labor, the environment, intellectual property, agriculture, data exclusivity and investor-state arbitration among others. Peter Petri, a Brandeis University professor of international finance whose models have been used by the Chamber of Commerce, says that the Trans Pacific Partnership will set the “benchmark” for global trade rules in relatively new areas in the services, investment and internet industries in which America has a competitive advantage.

“Global rules are becoming steadily less relevant in these areas because they were negotiated 20 years ago,” Petri tells TIME. “So we are heading for anarchy of sorts, with big countries deciding on an ad hoc basis on how to deal with each new technology, transaction and company, based on their narrow, short-term advantage. For the US, this may mean keeping a few more jobs in low-wage industries, but it will frustrate our most important global industries, and probably weaken the world economy for everyone.”

But even by Petri’s calculations the macroeconomic effect for the trade deal would be modest, adding about $77 billion per year to U.S. real incomes by 2025. And there will be winners — sophisticated equipment manufacturers for everything from turbines to medical equipment to heavy earth-moving machines — and losers, including producers of furniture and basic consumer electronics, according to Hufbauer. A Peterson Institute study says the U.S. manufacturing sector will contract by $44 billion, while companies in the services industry will expand by $79 billion.

Brown, who wears a canary in a cage pin to display his solidarity with workers’ rights, argues that TPP will be a disaster, with broad, long-lasting negative consequences for both his state and country.

“Fundamentally what these trade agreements have done is encouraged companies to follow business plans, which were sort of unknown until 20 years ago, where you shut down production in Steubenville or Toledo and move it to Wuhan or Mexico City and sell the products back into the United States,” says Brown.

“They talk about increased exports, but that’s a lot like saying well the Tigers got 5 runs, but the Indians got 7,” adds Brown of the United States Trade Representative office, which has been lobbying Democrats. “So you’ve got to talk exports-imports and every trade agreement we pass, we end up losing more jobs — good-paying manufacturing jobs, often union jobs, sometimes not.”

The debate will only heat up in next several weeks when TPA heads to the floor of the Senate and House. While Boehner and other Republicans in leadership continue to push the bill, Brown will headline an AFL-CIO event in Cleveland on May 4 in protest. Meanwhile Joyce will lay low — he doesn’t plan on attending any trade-specific events back home next week. 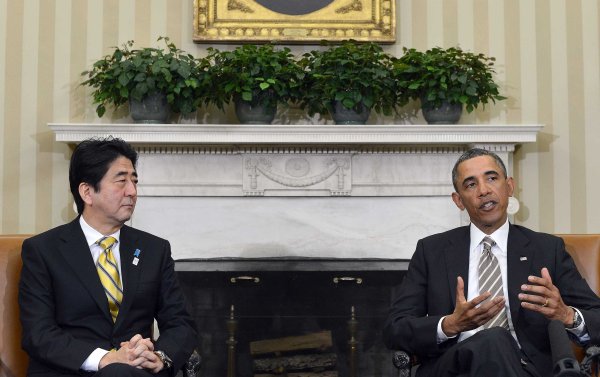