Illegal migrants arriving at Zefyros beach at Rhodes island, Greece, April 20, 2015.
Loukas Mastis—EPA
Ideas
By António Guterres
Guterres is the ninth Secretary-General of the United Nations. He previously served as U.N. High Commissioner for Refugees from June 2005 to December 2015 and is a former Prime Minister of Portugal.

The intensifying tragedy on the Mediterranean Sea poses the sternest test to Western humanitarian values in two generations. If we aren’t careful, we risk letting our most fundamental principles slip away, with consequences that could reverberate for decades.

More than 1,700 souls have already been lost at sea this year, fleeing for a safer world. This month alone, twice as many people drowned as during all of 2013. Last week, we witnessed the deadliest shipwreck my organization has recorded in the Mediterranean to date. And the spring has only just begun.

It’s time for Europeans to abandon the delusion that we can isolate ourselves from this crisis. Our region is living through the greatest humanitarian disaster since World War II, but our response is lagging far behind. It’s time to shift gears.

The first thing we must do is be more honest about what is happening. That includes recognizing that this is more than a migrant issue: Many of the people on these boats are refugees, fleeing from conflict and persecution. This means we have an unambiguous legal obligation to protect them. Seeking asylum is not only a universal human right—it’s also a political principle that has guided nations for thousands of years and is at the very foundation of the values upon which modern Europe was built.

Some people argue that letting in refugees and other foreigners poses a threat to our society’s way of life. But it is not by keeping people out that Europeans will protect their identity. On the contrary, it is by giving refugees protection and a future that we preserve what really makes us who we are. To do that, we need to steer a new course.

The conclusions of Thursday’s emergency summit in Brussels show that Europe recognizes the need for collective action to respond to the enormous tragedy that is unfolding on its borders. The E.U. must immediately restart a comprehensive search and rescue operation, along the lines of Mare Nostrum, to save people in distress at sea. The reinforcement of joint naval operations Triton and Poseidon is welcome, and we hope that many more will be rescued as a result.

But we know from experience that border surveillance alone is not an answer to a crisis that involves refugees. This stems from a simple truth: we can’t deter people fleeing for their lives. They will come. The choice we have is how well we manage their arrival, and how humanely.

Western nations must also commit to creating more legal alternatives for refugees to find protection, such as expanded resettlement and humanitarian admission schemes, enhanced family reunification, private sponsorship arrangements, and work and study visas. Without realistic alternative channels for people to reach safety, the much-needed increase in international efforts to crack down on smugglers and traffickers is unlikely to be effective.

Some of the latest E.U. responsibility-sharing proposals, such as better support for the countries receiving the most arrivals, emergency relocation of refugees between member states, and a pilot project for increased resettlement, are a starting point. But much more must be done. We need to distribute responsibility more widely within Europe, because a system in which two E.U. countries—Germany and Sweden—take the majority of all refugees, is simply not sustainable.

We can no longer meet our obligations simply by financing programs in other countries. The communities sheltering refugees in the Middle East and Africa are already overwhelmed. In Lebanon, for example, more than a quarter of the population are now refugees.

It’s clear the crisis in the Mediterranean will not end as long as the root causes pushing people to flee go unaddressed. This means a genuine commitment to solving the conflicts raging around the world, and to preventing new ones. It also requires us to rethink the way we plan and deliver development aid, and ensuring human mobility is a part of the development paradigm. Rather than simply dumping the problem on poorer transit countries such as those in North Africa, Europe must help those governments to protect refugees and others more effectively.

If Western nations continue to respond primarily by shutting their doors, we will keep driving thousands of desperate people into the hands of a growing criminal underworld, making us all less secure.

In the wake of the last crisis of this magnitude, following World War II, world leaders agreed upon a landmark system to share the responsibility of protecting those forced to flee their homes. The 1951 Refugee Convention was not born out of starry-eyed idealism. After years of conflict, and as a new Cold War descended, it was a deeply pragmatic document.

What leaders understood then was that, even in the worst of circumstances, security comes from managing a crisis, not hiding from it. That only solidarity and a genuinely collective response can stop suffering on a massive scale.

We need to heed their lesson. The moment has arrived for us all to step up to the plate, not just those on the front lines. We need to put our values into practice. Because values which we relinquish when the going gets tough are no values at all.

It is for times like these that we created the humanitarian system. We must not abandon it at precisely the moment when it is needed most.

Read next: One Migrant’s Harrowing Journey From Senegal to Italy 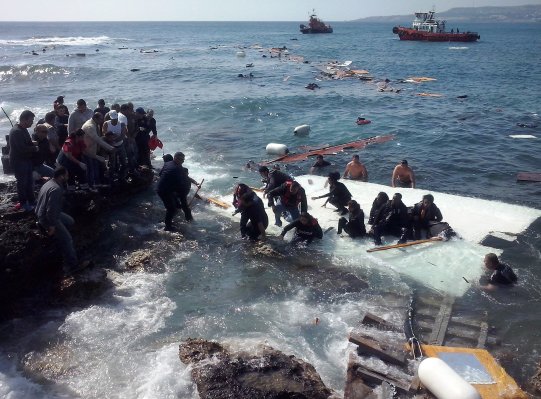