Seth Rogen Says Government Needs to Step Up On Alzheimer's

Seth Rogen may be one of America’s favorite funny guys, but when it comes to Alzheimer’s research, he’s not kidding around. Rogen’s mother-in-law was diagnosed with early-onset Alzheimer’s not long after he started dating his now-wife, Lauren Miller. He’s become a public face of advocacy for awareness about Alzheimer’s, even testifying before the Senate Committee on Appropriates last year in a bid to get more funding for research. The couple also work to raise money with their movement Hilarity for Charity, which has an event this weekend at the University of Vermont to congratulate students there for raising the most money of any college for the second year in a row. Their prize is a live narration of the Superbad soundtrack by Rogen and “McLovin” actor Christopher Mintz-Plass. We caught up with Rogen and Miller before the event.

TIME: What’s the concept behind Hilarity for Charity?

Miller: My mom was diagnosed at 55 years old with early onset Alzheimer’s. My grandfather had had it, and my grandmother. So it’s something that’s always been part of my life and affected me at an age when I was very young. After we formed Hilarity for Charity, we had all these young people reaching out to us who wanted a way to use their voices and take action, so we came up with this idea as sort of a charity-in-a-box program: we’d make it really simple for college students—fraternities, sororities, groups of friends, whatever—to throw these events, and we’d give them everything they need.

Rogen: Yep, and we thought, as much as we’d like to think a bunch of college kids would do a charity event out of the goodness of their hearts, some incentive might help in some capacity, so we tried to come up with prizes. Like me, I went and visited the school last year, met everyone and we showed an early screening of Neighbors, and this year we’re doing a live audio commentary of Superbad with me and Chris Mintz-Plass. Just stuff that you would hope they’d enjoy even if it wasn’t affiliated with a charity event in any way.

What do you hope fundraising like this can accomplish for Alzheimer’s research and treatment?

Rogen: From my perspective, it’s more about changing the conversation so that the government actually does something about it. I think the government is reactive to people’s desires as opposed to leading the way for people’s best interest. I think that people want to get elected and they want to stay in power, and if it seems like people care about something, then they appeal to that thing, you know? So that’s our real goal, is to make it that Alzheimer’s is the type of thing that people in government have to support to make the general population happy.

Do you think part of why it’s not a more strongly championed cause is because people think of it as something that affects older people?

Miller: That’s definitely one of them. It’s tough, we don’t have an adorable baby to put on our campaign posters, we don’t have success stories of people who have been cured of Alzheimer’s to get up and give a great, inspiring speech about how if you support us, people will be cured. It is an uphill battle, we’re very much at the beginning, but progress has been made. It’s just about rallying the voices. There are close to 6 million people living in this country with Alzheimer’s disease. So it’s about showing the caregivers for those people with the disease that they can use their voices, and if they do they’ll be heard, and change will come.

Rogen: And considering it’s costing the government more than any other disease, it’s especially odd that they don’t put more resources into trying to cure it.

Do you think a movie like Still Alice was helpful to the cause of raising awareness?

Miller: Oh, very. For Julianne Moore to portray someone with early onset Alzheimer’s was extremely helpful, and definitely educational. So many people saw it and came to me and said, “I didn’t know!” It was a huge step in the right direction. If you look at diseases like cancer, 30 years ago people whispered it because you didn’t say “cancer,” it wasn’t in TV shows and movies.

Rogen: And then it started to be. Movies like Love Story started to normalize it and make it something you don’t have to be ashamed of. It’s portrayed in the culture, and so it seems less like something you should be secretive about.

Miller: There’s also the stigma. A lot of people, when they’re diagnosed with Alzheimer’s, my mom included—she wouldn’t let us tell anyone. For a couple years, until she was so far advanced that it was so obvious and she didn’t know we were telling people, she wouldn’t let us tell anyone. Which is really sad. We just want to try to end that stigma.

I read that some doctors don’t even tell their patients they have Alzheimer’s.

Miller: That’s a huge issue. A lot of doctors don’t tell, because a lot of patient’s don’t want to know. They say, “Well if I have dementia, just leave it, I don’t want to know. And that’s not okay! People need to know. You can only attack something in the correct way if you know. And often it’s not being reported as a cause of death in an autopsy, which is a huge issue, because more people are dying from this disease than are currently recorded.

What is your hope for the future of Alzheimer’s research and treatment?

Miller: There’s a lot of promising studies out there, and if the government would just get behind and fund a heckuva lot more of them, I know we’d be a lot closer. 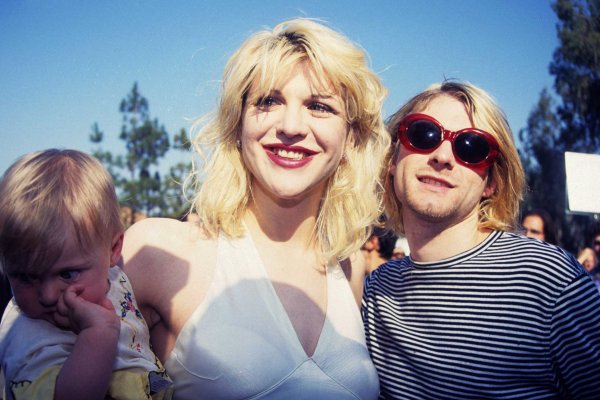 Kurt Cobain and Courtney Love's Former Apartment Is Now on Airbnb
Next Up: Editor's Pick