Inside the Search for the Chibok Schoolgirls Abducted by Boko Haram

Nigerian activist and “Bring Back Our Girls” co-founder Obiageli Ezekwesili left a room full of the most influential people in the world speechless this week, in an emotional speech saying they could not possibly move on while 219 schoolgirls were still crying to be rescued. It has been just over a year since Boko Haram abducted 276 schoolgirls in Chibok, in northern Nigeria, and while 57 have escaped, not one of them has done so because of military efforts.

Speaking at Tuesday’s TIME 100 Gala in New York City, Ezekwesili, a former Federal Minister of Education of Nigeria and Vice President of the the African division of the World Bank, took the opportunity to continue her work canvassing for the rescue of the Chibok girls. She called upon President Barack Obama to push for action, saying: “If he could get Osama bin Laden, he could get our girls.”

In the last year there has been much talk about the girls but little success. Below is the story of the search so far. The girls are being held, it is believed, in dense forest in the northeast of Nigeria. Nigerian forces entered the forest in the last week supported by intelligence and surveillance provided by U.S. and other Western states.

April 14-15, 2014 : Boko Haram fighters break into the Government Secondary School in the predominantly Christian town of Chibok in Borno State. They kidnap 276 schoolgirls: several of them jump off trucks carrying them away from the school.

April 23: Nigerian lawyer Ibrahim M. Abdullahi is the first to use the #BringBackOurGirls hashtag in a tweet during a UNESCO address given by Ezekwesili, who goes on to lead the Bring Back Our Girls campaign.

May 2: By now, more than 50 of the schoolgirls have escaped in separate groups.

May 4: Nearly three weeks after the kidnapping and after much criticism over his silence, President Goodluck Jonathan makes his first public statement on national television acknowledging what happened and vows to find the girls.

May 5: Abubakar Shekau, Boko Haram’s leader, releases a video claiming responsibility for the abduction and promises to sell the girls as slaves.

May 7: Just after #BringBackOurGirls reaches 1 million tweets, U.S. First Lady Michelle Obama tweets a photo of herself with a sign reading #BringBackOurGirls. Four days later, she delivers the presidential address rather than her husband, saying they are both “outraged and heartbroken” about the abduction.

Early May onwards: Teams of military advisors, negotiators and counsellors from the U.S., U.K. and France start providing help with the search efforts. China, Israel, Canada, Iran, and the E.U. all pledge assistance too.

The U.S. has at least 26 officials specifically tasked to the Boko Haram abduction, including three FBI officials and at least 16 military personnel. The U.K. deployed Sentinel and Tornado GR4 aircraft with surveillance capabilities to help in the search, and it continues to provide commercial satellite imagery to the Intelligence Fusion Cell in Abuja, where UK personnel are working alongside Nigerian, US and French colleagues. Ned Price, the Assistant Press Secretary of the National Security Council, says on Thursday: “The U.S. Government has maintained an interdisciplinary team in Abuja consisting of specialists on temporary assignment and personnel assigned to our Embassy in Abuja. Given the regional component to Boko Haram, there are also individuals in other locations including U.S. Embassies in neighboring countries that are part of this effort.”

Nigeria turns off cell phone coverage in the North East area where Boko Haram are operating making it more difficult for militants to coordinate attacks, according to sources. However, it also makes intelligence gathering from phone calls impossible. The Nigerian military strategy also focuses on forcing Boko Haram out of urban areas into forests, further hindering intelligence gathering.

Later that summer, Nigeria requests to purchase American Cobra helicopters for the search but the U.S. declines as Nigeria does not have the infrastructure in place to fly and maintain a fleet of Cobras, which would take several years to develop.

May 12: Boko Haram releases a new video appearing to show about 100 of the missing girls. They boast the girls have converted to Islam and refuse to release them unless the government releases Boko Haram militants from prison.

May 22: The U.S. deploys 80 troops and an unmanned aerial vehicle to Chad to help regional efforts to rescue the schoolgirls.

May 26: Chief of Defense Staff Alex Badeh, Nigeria’s highest ranking military officer, says the army has located the girls but refuses to give any details of their whereabouts, causing doubts about the veracity of the reports. He says the army would not make an attempt to rescue them by force: “We can’t kill our girls in the name of trying to get them back.”

May 27: Reports emerge that Nigeria’s former president Olusegun Obasanjo has met with people close to Boko Haram to broker a deal to release the girls.

July 15: Nigerian police say they arrested Zakaria Mohammed, a high-level Boko Haram member, who was fleeing military operations around the Balmo Forest. It is not clear if he provided any information on the whereabouts of the schoolgirls.

October 17: The Nigerian army announces a ceasefire deal between government forces and Boko Haram, following negotiations mediated in Saudi Arabia by Chadian President Idriss Déby and Cameroonian officials. The announcement raises hopes that the remaining girls might be released, but Mike Omeri, Nigeria’s chief security spokesman, says no deal is in place.

February: After being awarded scholarships, 21 of the Chibok girls who managed to escape are now studying at the American University of Nigeria, in Yola, the capital of neighboring Adamawa state.

March 6: Work begins to rebuild the girls’ school in Chibok, which has been closed since they were abducted.

March 19: Nigeria’s army chief Lieutenant General Kenneth Minimah admits there is “no news for now” about the girls’ fate, despite military successes in recapturing towns held by Boko Haram.

March 25: A 56-year-old woman abducted by Boko Haram in July 2014 is released after 8 months. She tells the International Centre for Investigative Reporting in Nigeria that she was being held in the same house as the Chibok girls in the town of Gwoza in Borno State, under 24-hour-security by armed guards – although she never actually saw the girls herself.

March 27: The town of Gwoza is recaptured by the Nigerian army but, despite earlier reports suggesting otherwise, the kidnapped girls are not found.

April 18: President-elect Muhammadu Buhari, who will take office on May 29, writes in the Times that his government will do everything in its power to bring the girls home, but says his administration will begin with a honest assessment as to whether the Chibok girls can be rescued: “Currently their whereabouts remain unknown. We do not know the state of their health or welfare, or whether they are even still together or alive. As much as I wish to, I cannot promise that we can find them.”

April 19: Nigerian ground troops move into the Sambisa forest hoping to find and rescue the Chibok girls after sustained air strikes carried out by the Nigerian Air Force over the past eight weeks.

April 21: Obiageli Ezekwesili tells the Time 100 Gala “If he (President Obama) could get Osama bin Laden, he could get our girls.”

Read next: Boko Haram has fled but no one knows the fate of the Chibok girls one year on 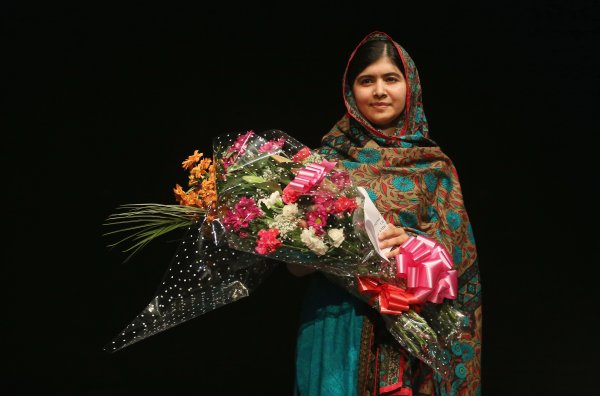