A woman rides a donkey past a convoy of government troops in Tabit village in the North Darfur region of Sudan, Nov, 2014.
Abd Raouf—AP
By Elizabeth Dias

Sudanese minister of finance and national economy Bader Eldin Mahmmoud Abbas Mukhtar visited Washington recently to lobby the United States to lift sanctions and remove the country from a list of states that sponsor terrorism.

This is the second time this year that a high profile Sudanese delegation has received visas to visit Washington. Sudanese foreign minister Ali Karti visited in February for the National Prayer Breakfast. Mukhtar was in town for the World Bank-International Monetary Fund spring meetings, and his delegation included representatives from the Central Bank of Sudan.

Mukhtar met with Assistant Secretary of Treasury Marisa Lago and Special Envoy to Sudan and South Sudan Donald Booth on April 18. His goal, he tells TIME, was to move forward on the “improvement of the bilateral relations rather than always talking about domestic political issues in Sudan.”

The domestic political issues in Sudan — including the extensive fighting between numerous government and rebel factions, as well as the government denial of humanitarian aid and mounting allegations of military war crimes against civilians — were the subject of a February feature in TIME, “Sudan: The Forgotten War.”

Sudan’s tactics in fighting rebel groups have been widely criticized. According to the U.N., the Sudanese Armed Forces burned an average of about 22 villages a day in Darfur over the first half of last year. In the South Kordofan region, reports of government planes bombing civilian and medical targets arrive regularly. In February, the United Nations Security Council threatened new sanctions against Sudan, and Samantha Power, United States Ambassador to the U.N., accused Sudan of “obstruction, harassment and direct attacks that have impeded efforts to deliver humanitarian aid in Darfur.”

From TIME’s February story: “‘It is not any different than what is happening in Syria,’ says Tom Catena, a U.S. surgeon who runs the only full-scale hospital for the nearly 1 million civilians caught in the Nuba Mountains region of South Kordofan. ‘It just has been going on three decades longer.’” (Catena is one of the 2015 TIME 100.)

Here’s the topline of Mukhtar’s interview with TIME at the Washington Press Club, with his quotes, condensed for length:

He is frustrated with the United States policy on Sudan. “Let me be frank with you,” Mukhtar says. “We have tried a lot to engage with the Americans. … They are always coming with moving political targets. … Our feel is that the object of the American policy towards Sudan is the regime change, not having any cooperation. … We are always trying to cooperate with the Americans … and the international community in combatting terrorism and we are adopting standards of antiterrorism finance in our financial systems and anti-money-laundering. … Instead of being rewarded for that, we have been punished.”

He is unwilling to entertain reports of human rights abuses in Sudan. Mukhtar denied allegations of humanitarian abuse, unethical mining of gold, and exploitation of citizens in Sudan. “This is reflected by some of the activist groups,” he says. (Gamal Goraish, a counselor from the Embassy of Sudan in the United States who was present at the interview, clarifies, “The Enough Project mainly.”) Mukhtar continues, “They are trying to say that a country or a government exploiting the people. What on Earth that a country or a responsible government that is slaying its people, exploiting them, abusing them, violating rights, not respecting them?”

He continues the Sudanese government’s denial of a mass Sudanese military rape of 221 women and girls in the Darfur village of Tabit, reported by Human Rights Watch. “Nobody can say that also government encouraging or motivating people to do bad things like this. Even in our religion in Sudan, this is out of any religion beliefs. … This has been crafted unfortunately even by some of the people inside the UNAMID (United Nations Mission in Darfur), trying to say that government of Sudan is encouraging such bad things. … The people of Sudan are not you see like animals in a forest.” (A woman with the Central Bank of Sudan, also part of the delegation, adds, “No man can treat woman badly, never.”) He concludes, “They talk about the collective raping event which is not true.”

He thinks the U.S. should support debt relief for Sudan, in part due to Sudan’s assistance to the U.S. in fighting terrorism. Sudan’s debt, according to the Embassy of Sudan in Washington, amounts to $43.5 billion, of which $2.6 billion is owed to the U.S. “We are playing a positive role in Libya trying to stabilize the situation there. With our partners there, we are pushing negotiations between the conflicting parties there in order to reach a compromise. … Now the situation in Darfur is much better… this not because the government goes there and killing the people irrationally, the conflict was being caused by the conflict on natural resources, by the nomads and the farmers, this is triggered the instability. … the government is trying to fix the situation, trying to reach compromise.”

He defends Sudan’s high arms import budget. “Buying weapons, a country which is facing lot of challenges, if the rebels started any activity in the United States, do you think that the government just will stay there just to come to power in Washington, or they should defeat them there? If any group of people are out of law… the responsible government should act responsibility to protect the security of the county and to bring security for the people and to prevent anarchy to happen in the country. … This is why we are trying to also strengthen our security capabilities and to strengthen our army. What do you expect us to do as a responsible government?”

The Central Bank of Sudan has approximately $21-24 billion in foreign exchange currency (Forex). “The international reserve is always evaluated in terms of months of imports. Now the Central Bank has about three months reserve of foreign currency and we are trying to build more reserves. Our import bill is $7-8 billion. You can calculate after that.” 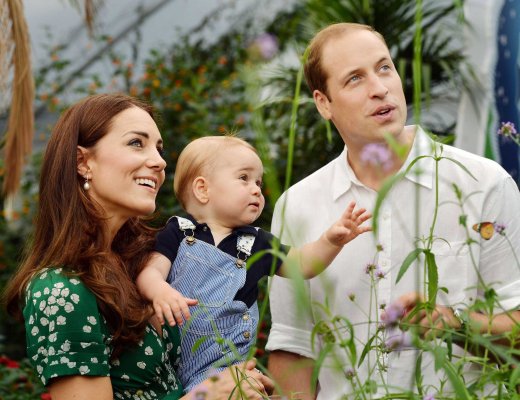 Here's How to Find Out About the Royal Baby First
Next Up: Editor's Pick