What's the Deal With the Comcast-Time Warner Cable Merger?

The Comcast Corp. logo is seen as Brian Roberts, chairman and chief executive officer of Comcast Corp. (R) speaks during a news conference in Washington on June 11, 2013.
Bloomberg/Getty Images
By Haley Sweetland Edwards

The gargantuan, $45.2 billion merger between the nation’s two largest cable companies, Comcast and Time Warner Cable appears to be hitting a regulatory wall.

Here’s the quick-and-dirty on what’s going down:

Wait, I thought this thing was a done-deal?

You and everyone else. When Comcast first announced the proposed merger 14 months ago, in February 2014, industry insiders thought it was a slam dunk. But late last week, news broke that officials at the Federal Communications Commission and the Department of Justice would hold a meeting this week that, at the very least, would slow the approval process down.

What are the FCC and the Justice Department worried about?

If the merger goes through, a combined Comcast-TWC would control 30% of the pay-TV market, with roughly 30 million subscribers — three times the number of its closest cable competitor. It would also control almost 60% of the country’s market for broadband Internet, the pipe through which an increasing number of Americans watch TV, thanks to companies such as Netflix and Hulu (which Comcast also owns in part). FCC officials have expressed concern that such a merger would “not be in the public interest,” while Justice Department lawyers have whispered that it just might be big enough to trigger anti-trust actions.

So what happened this week?

On Wednesday, the FCC and Justice Department officials met with muckety-mucks at Comcast and TWC to cordially express their misgivings, according to a source familiar with the meeting. FCC officials said they may recommend that the merger be subject to an additional round of scrutiny, which means more meetings, more hearings, and more airing of Comcast’s laundry.

Uh-oh. That doesn’t sound good for the merger.

It’s definitely not. But it’s also hardly a death knell. While FCC and Justice Department officials stress that the merger could still go through, regulatory experts say the process will likely be long and tedious, since there’s no official timeline for when a decision will be made.

So what happens now?

Top lobbyists at Comcast and TWC are expected to spend the next few months doing their very best to cajole officials at the FCC and Justice Department to just push the deal through.

What’s Comcast and TWC’s very best argument in favor of the merger?

The two companies don’t overlap geographically. If you’re a TWC subscriber in New York City, for example, you couldn’t switch over to Comcast even if you wanted to; Comcast doesn’t offer service there. So combining the two companies doesn’t reduce cable and broadband Internet customers’ choices. And, anyway, since Comcast’s broadband service is faster than TWC’s in some places, some current TWC customers could actually see their service improve under Comcast. Comcast, which also owns NBC Universal, also argues that it has to be big in order to compete with enormously popular web streaming companies, such as Netflix and Apple TV.

So what are some government officials and public interest groups’ argument against the merger?

The biggest issue is the power that a combined Comcast-TWC would have on the greater TV/Internet marketplace. It could, for example, wield an unfair competitive advantage against both TV producers, who negotiate to license their content to cable companies, and online video streaming companies, like Netflix, which rely on broadband service providers to deliver their content quickly. Comcast already owns NBC Universal, one of the biggest TV producers, and part of Hulu, one of the biggest streaming TV producers.

At this point, what’s happening inside the FCC and the Justice Department is unclear. Neither agency is under any obligation to make its thinking public at this stage. And while industry insiders say the best weathervane is Wall Street, that’s much help these days either: Comcast stock dropped precipitously on Friday, when news of this week’s meeting with the FCC broke, but skyrocketed again at the close of business Wednesday, stretching up close to a five-year high. 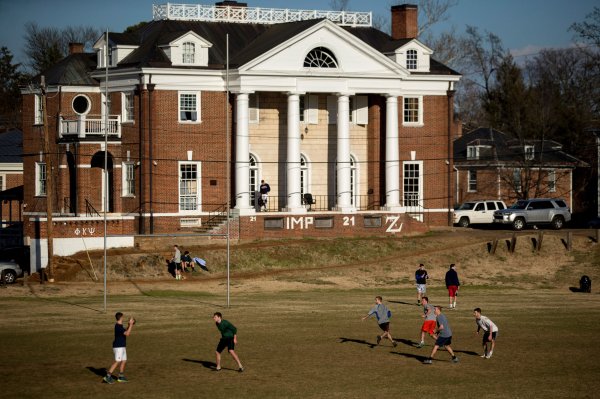 Frat Plans to Sue Rolling Stone Over Campus-Rape Article
Next Up: Editor's Pick