E.U. leaders gathering for an extraordinary summit are facing calls from all sides to take emergency action to save lives in the Mediterranean, where hundreds of migrants are missing and feared drowned in recent days

Clinton Allies Come to Her Defense

The physician and TV personality slams his detractors and responds to their critiques. “In some instances, I believe unconventional approaches appear to work in some people’s lives,” Dr. Mehmet Oz writes in an exclusive for TIME

Civil Lawsuit to Be Filed in Michael Brown’s Death

Lawyers for the parents of Michael Brown, the unarmed, black 18-year-old who was fatally shot by a white police officer in a St. Louis suburb, have announced that they plan to file a civil lawsuit against the city of Ferguson on Thursday

Around 143 million Americans in the lower 48 states are at risk of experiencing an earthquake — with 28 million being in danger of “strong shaking.” The increase is due to population migration, with more people moving to earthquake hot zones on the West Coast

Al-Jazeera English has had its broadcast in India suspended for five days, with the Indian government ruling that the Qatar-based international news channel had previously shown maps that misrepresented the disputed border region of Kashmir

Fans of the original Spider-Man cartoon and comics can rejoice — an animated feature film will hit the screens in 2018, Sony Pictures chairman Tom Rothman announced. The $4 billionSpider-Man franchise has spawned a devoted following in recent years

As it prepares to spin off PayPal over the summer, eBay reported stronger than expected first-quarter earnings on Wednesday thanks to its growing payments business. But eBay’s marketplace is declining, which doesn’t bode well for its future success

Barry Bonds has been cleared legally after 11½ years in court. A federal court of appeals threw out Bonds’ obstruction-of-justice conviction on Wednesday, ruling that his answer before a grand jury in 2003 was not material to the government’s investigation

British Conservative Party chairman Grant Shapps was in an all-out denial mode on Wednesday, after a story broke in a U.K. newspaper this week claiming he had edited his own Wikipedia page and those of rival politicians

Starz Digital announced on Wednesday that it picked up the North American rights to Boulevard, Robin Williams’ final dramatic film, with plans to release it on July 17. Boulevard had its world premiere at the 2014 Tribeca Film Festival 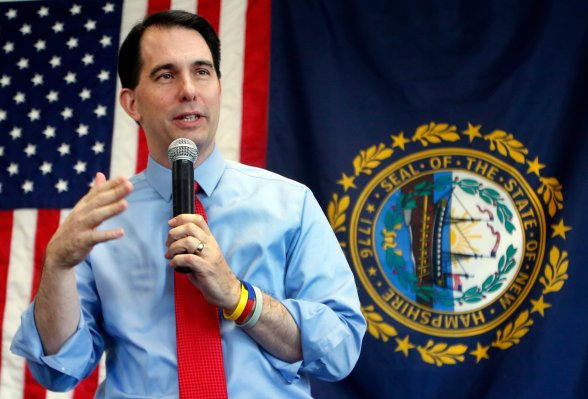 Why Walker's Immigration Flip-Flop Could Hurt
Next Up: Editor's Pick