Protesters carry a farmer who hung himself from a tree toward an ambulance after being released from the tree during a rally organized by Aam Aadmi Party in New Delhi on April 22, 2015
Adnan Abidi—Reuters
By Rishi Iyengar

An Indian farmer hanged himself at a political rally in New Delhi on Wednesday, in an apparent attempt to spotlight the suffering of the country’s impoverished rural citizens as Prime Minister Narendra Modi’s administration throws its weight behind land reforms.

The farmer scaled a nearby tree and jumped off one of its limbs at the rally organized by Modi’s rival Aam Aadmi Party (AAP), Reuters reported.

Farmer suicide is a long-standing problem in India, and the country has seen a rise in reported deaths over the past month as unseasonal rains have ruined crops. The man who died most recently, Gajendra Singh from the western state of Rajasthan, allegedly left a suicide note citing heavy losses. The note, according to the Indian Express, said Singh had three children and had been kicked out of the house by his father after his crops failed.

The incident occurred as opposition in the agricultural community rises against a proposed law to simplify the acquisition of farmland for certain kinds of industrial and developmental projects.

Singh’s death immediately set off a political blame game, with some AAP politicians, who had gathered to oppose the Modi government’s proposed land reforms, reportedly calling his death a “conspiracy,” and the opposition Congress Party demanding legal action against Modi and AAP leader Arvind Kejriwal.

The incident will now be probed by police, according to India’s NDTV news channel. Modi tweeted his condolences on Wednesday evening, saying he was “deeply shattered and disappointed” at Singh’s death. 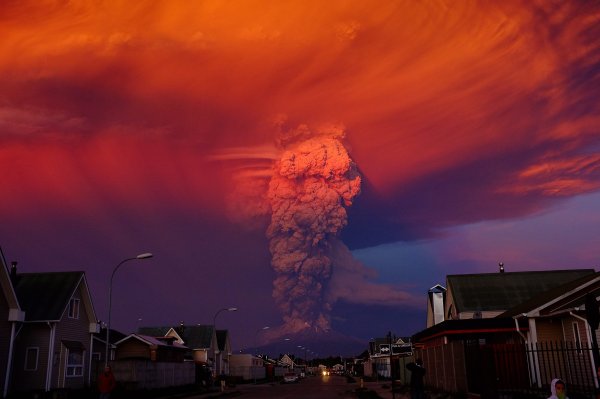 See the Eruption of Chile's Calbuco Volcano Paint the Sky
Next Up: Editor's Pick