See the Eruption of Chile's Calbuco Volcano Paint the Sky

The Chilean Calbuco volcano seen from Puerto Montt, located 600 miles south of Santiago de Chile, Chile on April 22, 2015. The eruption caused a column of smoke over ten miles high. Authorities declared a red alert and ordered the evacuation of around 1500 residents in the area surrounding the volcano.
Alex Vidal Brecas—EPA
By Eliana Dockterman

The Calbuco volcano in Chile erupted for the first time in more than four decades on Wednesday, prompting officials to issue a red alert for the city of Puerto Montt. Authorities evacuated around 1,500 residents within a six-mile radius of the volcano after it spewed ash into the air, according to the Associated Press. The volcano, located some 600 miles south of the capital, Santiago, last erupted in 1972.

This is the second eruption in Chile this spring. In early March, the Villarrica volcano expelled ash and lava. Chile has the second-largest chain of volcanos in the world, following Indonesia. 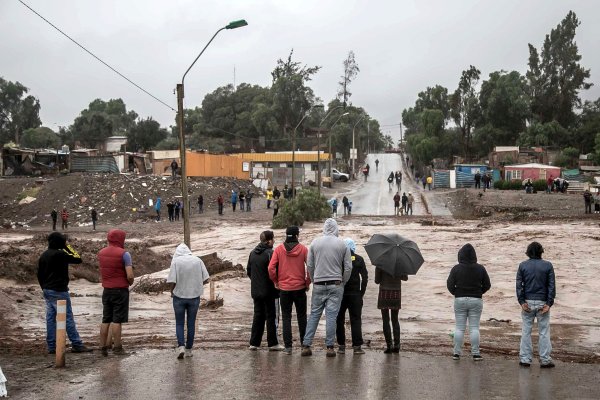