Shannon LaNier: Ben Affleck and PBS Failed at Helping Viewers Deal With the Past

Peter Kramer—NBC/Getty Images
Ideas
By Shannon LaNier
Shannon LaNier is the host of the show Arise Entertainment 360 and the co-author of Jefferson's Children.

It saddens me to learn that superstar Ben Affleck asked Henry Louis Gates Jr. and the Public Broadcast Service to withhold information about his slave-owning ancestors when he appeared on the documentary series “Finding Our Roots.” It’s understandable that Affleck would be embarrassed to learn such shocking news about his ancestors, but we can’t hang him out to dry for making an emotional request. With a little research, a huge number of Americans would find out that they too have not only slave owners but slaves in their bloodline.

As a descendant of President Thomas Jefferson and his slave Sally Hemings, I know what it’s like to accept the good, the bad, and the ugly of our pasts. However, we have to stop censoring history and start accepting it and learning from it. Affleck and PBS missed out on an important opportunity to face the ugly truth head on. This is a chance to educate and enlighten America about its painful past and current struggle. Instead of hiding the information about the Gone Girl star’s past, maybe PBS could have, and still can, help him and others cope with the devastating news that his ancestor owned people.

Pain, anger, guilt and embarrassment are all normal emotions when people start digging into their pasts, and that’s natural, but those feelings must be addressed. We must own up to our past so we can learn from it and move boldly toward the future. As uncomfortable as it may be, the first step in the healing process is to admit what happened and then discuss it. Avoiding our collective past is one of the reasons why this country is still experiencing so much racial unrest, because so many people, black and white, refuse to deal with the past and come to a place of healing.

In my opinion, one thing white people have to understand is that most black people are not going to blame them or hold them responsible for what their ancestors did decades before they were born. I’m not going to ask you for reparations, and I’m not going to stop watching Ben Affleck’s movies (except Gigli). Life will go on, but understanding how we are all interconnected would help make this world a better place. One group I belong to that’s helping to do just that is the Coming To The Table organization. It provides resources, seminars and a supportive environment for those wanting to acknowledge and heal wounds from racism that is rooted in the history of slavery. They literally sit at a table with descendants of slaves and descendants of slave owners and use conflict resolution to help people deal with their emotions. It’s an amazing healing process to witness and be part of. 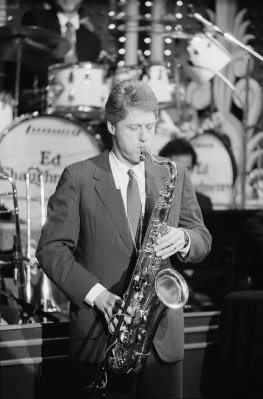 Want to Be President? Book Your Late Show Appearances Now
Next Up: Editor's Pick