During his performance at the TIME 100 gala Tuesday night, Kanye West jokingly warned fellow honoree Lee Daniels not to steal any of his act for the characters on his TV show Empire.

“Lee don’t try to take this on your next season, though man– trying to have one of the brothers pulling my sh-t man,” Kanye said in between songs, an apparent reference to the sons of Lucius Lyon on the hit Fox show. “If you see this on Empire, you just know where he got it from.”

The hit Fox show tells the story of a terminally ill hip hop magnate whose family members—and ex-wife—are fighting for control of his entertainment empire.

West performed hits like “New Slaves,” “Blood on the Leaves,” and “Gold Digger” while bathed in golden light in front of several shirtless men covered in white chalk. So keep your eyes peeled for some topless chalk-covered guys backing up Jamal or Hakeem on Empire. 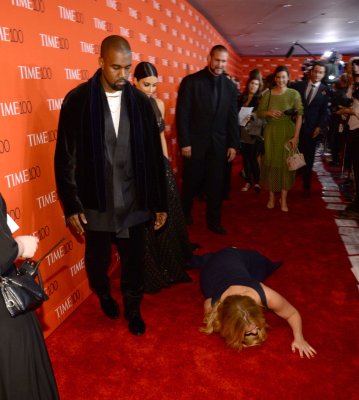 The 8 Best Things That Happened at the TIME 100 Gala
Next Up: Editor's Pick