Hillary Clinton participates in a round table discussion with Whitney Brothers management and employees on April 20, 2015 in Keene, NH.
Don Emert—AFP/Getty Images
By Sam Frizell

KEENE, N.H.—Hillary Clinton responded to renewed controversy on Monday about the Clinton Foundation’s dealings, even as she sought to focus attention on her conversations with New Hampshire voters and a broad-brush economic vision.

“We’re back into the political scene, and therefore we will be subjected to all kinds of distractions and I’m ready for it,” Clinton told reporters. “I know that comes unfortunately with the territory.”

“It is, I think, worth noting that the Republicans seem to be talking only about me,” she continued. “They wouldn’t have anything to talk about if I weren’t in the race. But I am in the race, and hopefully we’ll get onto the issues, and I look forward to that.”

The foundation’s fundraising has been in the spotlight thanks in part to an upcoming book by former George W. Bush consultant Peter Schweizer called Clinton Cash, which purports to find instances in which U.S. policy benefited companies that donated to the Clinton Foundation while she was Secretary of State.

Republican presidential candidates lambasted Clinton during events in New Hampshire over the weekend, with Kentucky Sen. Rand Paul saying the book’s findings would include “big news” that would “shock people.” (The book is not yet publicly available.)

But at her events Monday, Clinton kept the focus on her own campaign in the Granite State. “I want to hear from people in New Hampshire about what’s on their minds,” she said.

The second week of Clinton’s candidacy began much like the preceding week in Iowa, with small events and roundtable meetings with voters. On Monday she began with a tour of a factory run by the Whitney Brothers, where employees were building blocks, furniture and play toys for infants and toddlers. Then she sat at a roundtable in the company’s warehouse, fielding questions from company employees.

As expected, Clinton did not lay out any new policy positions, instead speaking in broader strokes about her initial goals for her small-event and voter-oriented campaign and her vision of a more inclusive economy.

“I want people to know that I’m listening, and that I’m accessible, and I’m running a campaign about them,” Clinton said. “That’s about the needs of the people of New Hampshire. That’s the kind of campaign I want to run.”

She reiterated comments she made last week during her Iowa events, when she lamented that hedge fund managers pay lower taxes than middle class Americans, thanks to low capital gains taxes. Clinton again sounded her support for a constitutional amendment to rein in money in politics and suggested increased regulation of the financial market.

“If it’s just playing back-and-forth in the global market place to get one-tenth of one percent advantage, maybe we should not let that go on because that’s at the root of economic problems we all remember painfully in 2008,” she said.

Clinton will be under pressure to clarify her views as the race continues. Her likely challengers for the Democratic presidential nomination are already staking out firm positions to her left and beginning to attack Clinton.

“Do we have the ability as a party to lead by our principles or are we going to conduct polls every time we try to determine where the middle is on any given day?” he said in an interview with NPR on Monday.

New Hampshire has been Clinton-friendly country since 1992, when Bill came off a second place finish in the state to win the nomination. Hillary celebrated her birthday in New Hampshire in October 1991 campaigning for her husband, and many of New Hampshire’s Democratic leadership are firm Clinton allies. Hillary’s surprise comeback win in the Granite State in 2008 prolonged the primary battle against Barack Obama for months.

During her roundtable discussion, Clinton spoke about expanding pre-kindergarten education and the importance of early childhood programs while sitting in a warehouse for young children’s furniture and toys soon to be shipped to classrooms.

“Of course, it’s no accident that I’m at a place whose customer market is between six months and six years,” Clinton said.

She also emphasized the importance of manufacturing jobs in the U.S., remarking that many of the machines in the Whitney Brothers facility are foreign-made. “How do we get back into basic production again so we can resume our lead in manufacturing,” Clinton said. “You walk around here you see these machines from Italy or Germany or wherever else they’re from. Why? Why aren’t we producing these machines?”

Her tour of the Keene facility will be followed on Wednesday by a roundtable at a community college in Concord.

In both states, her small-scale events have been hemmed in by a large press corps. Clinton and the seven Whitney Brothers employees who sat with her were greatly outnumbered by the 70 or so members of the press gathered to watch her speak on Monday. 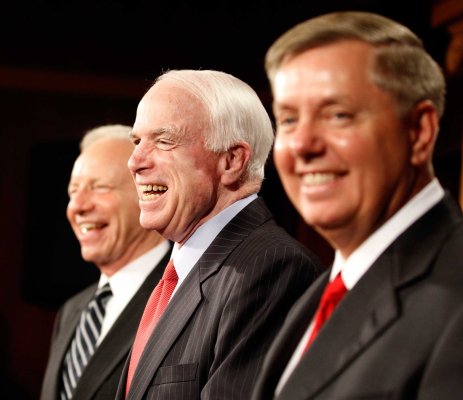 Meet the Three Best Friends Who All Ran for President
Next Up: Editor's Pick