Mohamed Morsi, once the elected president of Egypt, could be sentenced to death on Tuesday at the conclusion of a trial that has been one of the symbols of a state clampdown on the Islamists who once governed the country.

The former leader’s predicament is a sign of the sweeping reversal of fortunes suffered by his Muslim Brotherhood movement since he was removed from power by the military.

Morsi came to power in the country’s first election following the 2011 revolution that ended three decades of autocratic rule by President Hosni Mubarak. After a deeply polarizing year in office and a huge wave of protests against him, he was deposed by the armed forces in July 2013.

The military-backed government that replaced Morsi launched a crackdown on his supporters, producing the worst season of political violence in Egypt’s contemporary history. The Muslim Brotherhood was later designated a terrorist organization and its leaders jailed and placed on trial.

Following his removal from power, Morsi and several other former officials disappeared, their whereabouts unknown for weeks. Morsi resurfaced in in court in November 2013. When asked to identify himself, he told the court, “I am Dr. Mohamed Morsi and I am the President of the republic.”

In spite of Morsi’s defiance, the Brotherhood as an organization was sent into the political wilderness. Government and media alike portrayed them as terrorists, blaming them for a recent upsurge in armed attacks. Repulsed by Morsi’s own tone-deaf and autocratic tenure in power, erstwhile political allies abandoned them.

Several other Brotherhood leaders have been sentenced to death, including the group’s spiritual leader, Mohamed Badie, who was convicted in a mass trial of 183 people for plotting violence following Morsi’s removal.

“The government is using death sentences as part of an elaborate signaling game in its talks with the Brotherhood, essentially holding some of the group’s officials as hostages to pressure the Brotherhood into submitting to the government’s terms,” said Aziz El-Kaissouni, a political analyst and former visiting fellow at the European Council on Foreign Relations. “Morsi would be the trump card in that process; sentencing him to death wouldn’t leave much more room for escalation,” he said.

The former president is currently a defendant in three separate trials: one for spying, one for escaping prison during the 2011 uprising, and one for inciting the killing of demonstrators in 2012. The verdict and sentence are expected in the third trial on Tuesday.

The charges stem from violence that unfolded outside the presidential palace in Cairo in December 2012, when plainclothes Brotherhood supporters clashed with demonstrators. The incident marked a marked a political turning point. Many Egyptians saw the clashes as a troubling sign of the breakdown of public order.

Now Morsi is set to be sentenced by a court that has played a key role in the state campaign against the Brotherhood. Hundreds of Egyptians, including numerous alleged Brotherhood supporters, have been sentenced to death in mass trials. However any death sentence is unlikely to be carried out immediately.

“The judiciary is now extremely politicized and is used as a tool by the current government,” said Samer Shehata, an Egypt scholar at the University of Oklahoma. “We need no further confirmation,” he said, “that political space has closed considerably in Egypt and the country is not democratizing.”

Since the 2013 military takeover, Egypt has been shaken by an increase in insurgent attacks that have claimed the lives of hundreds of members of the security forces, particularly in the north Sinai region. Government officials blame the Brotherhood for the violence, but the organization insists that it is peaceful and has publically condemned some attacks.

In response to the expected verdict, The Brotherhood called for demonstrations on Tuesday. “The Egyptian Revolution is at a critical moment where the military junta, having failed to halt the growing protest and peaceful resistance movement, is endeavoring to push the country into a spiral of chaos using all tactics of repression, murder and torture,” the group said in a statement issued from its London office.

“The Rubicon was crossed with the mass killings of August 2013,” said Kaissouni, “Since then, we’ve been witnessing the inexorable transformation of Islamism in Egypt, manifest in the growing irrelevance of organized, nonviolent Islamist opposition, and the concurrent rise of Islamic militancy.” 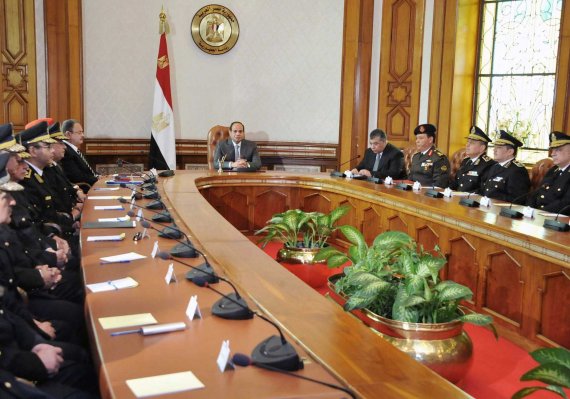 Egyptians Question Role in Yemen
Next Up: Editor's Pick