Republicans Aren't the Only Ones Who Believe in God

Here it comes again, as regular as the flu season, and almost as frequent: the march of the presidential contenders, and the mad scramble, especially among Republicans, to enlist God as campaign manager numero uno.

On the far right we’ve got Senator Ted Cruz of Texas, who, in a 2013 interview said: At the end of the day, faith is “a personal relationship with Jesus Christ as your Lord and Savior.” Florida Senator Marco Rubio upholds the teachings of the Catholic Church on gay marriage and abortion. The supposed front-runner, Jeb Bush, also Catholic, has openly declared that public leaders need to be guided by faith, and recently met with Russell Moore, head of the public policy arm of the Southern Baptist Convention, presumably in an effort to beef up his Christian cred. Bush will also be speaking at the commencement of Jerry Falwell’s Liberty University. So God-centric has our political culture become that Hillary herself—yes, the she-devil who sends chills of fear up every Bible-thumper in America—recently declared, “the Bible was and remains the biggest influence on my thinking.”

Gaily fluttering flags hanging from countless front porches all over the deep South, including many in my own former neighborhood in Baton Rouge ask: “WWJD?” To which I, a somewhat left-of-center Jew, would always think: “He’d hang out with prostitutes, feed the poor, try to get medicine to people dying of AIDS, and finally go to shul to daven mincha.”

My former neighbor in Baton Rouge, Randy Nichols, and I used to sit under the shade of the live oak trees and talk about such things — about the gap between talking about God and doing God’s work, about how easy it is to forget that Jesus of Nazareth was a Jew steeped in the teachings of the biblical prophets, about people who preach mercy but show none. It was weird, too, because Randy is an ordained Methodist minister, polite to his core, who still speaks with the East Texas drawl of his youth, whereas I’m the opposite, right down to my East Coast education and penchant for sprinkling my conversation with a combination of Yiddish and words that can’t be printed here.

Even so, we had a lot in common: We shared a profound belief in God. What was it, we’d ask ourselves, in our shared holy books, our shared if fraught history, our shared stake in the experiment that is American democracy that would so skew one set of God-infused beliefs from another? And why would God desire a world where we locked people up, sometimes indefinitely, in brutal surroundings? For that matter, what is He thinking when He observes His idiot children poisoning the world He brought into being?

I don’t actually think that God thinks about all the plastic bottles that we throw into the ocean. At least not in any way that I can parse out. The word God is itself a metaphor, the best I (and billions of others) personally can do to get at something that all my words can’t elucidate but my heart knows to be true.

There, I said it. I believe in God. I mean, I really really believe in God. I believe in God so much that my relationship to Him infuses and has infused pretty much my entire waking life, and has from as early as I can remember. (I use the male pronoun because the English language doesn’t have a gender neutral term.) Like my gruff, Republican grandfather, who attended synagogue without fail, presided over a kosher home, took in distant relatives from Germany as Adolf Hitler came to power, and once told my father that a world without God simply didn’t make sense, I cleave, in my own imperfect way, to faith. As do countless others who share my left-leaning world view.

And yet the pollsters tell us that God belongs primarily to the Republican Party, citing, for example, the horrifying trend among Republican candidates to say that America is a Christian nation and a recent poll that found that 57% of Republicans support establishing Christianity as the national religion.

I now live in northern New Jersey, where, unlike in Baton Rouge, people generally don’t wear their faith on their sleeves. And yet my overwhelmingly liberal-leaning town of about 40,000, a town so stuffed with members of the chattering classes that it’s come to be known as “the Upper West Side of New Jersey,” is home to two synagogues (three if you count the one that straddles the border) and some 45 churches. That’s an awful lot of praying from folks who, the popular discourse tells us, don’t have much use for religion. 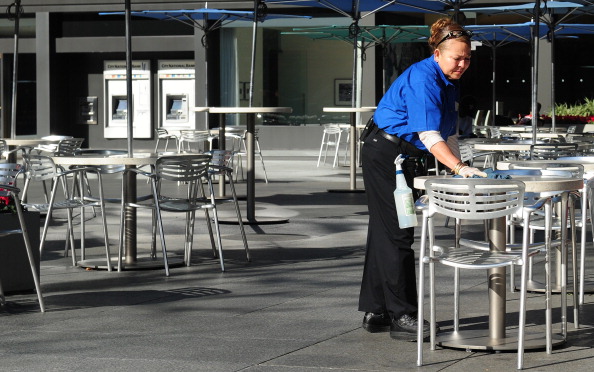 Why Food From Forests Could Help Feed the World
Next Up: Editor's Pick