Brutal Murder Is Sparked by Anti-Immigrant Rage in South Africa

Early Saturday morning in the Alexandra Township just outside of Johannesburg, South Africa, a crowd watched as two men bludgeoned and stabbed to death a migrant from Mozambique. Emmanuel Sithole, a small-time vendor of loose cigarettes and an ardent fan of the South African football team, according to the plastic bracelets on his wrist, was the seventh person to die in a wave of anti-foreigner violence that recalls the horrors of 2008, when more than 60 were killed in xenophobic attacks that shocked the world with images of immigrants “necklaced” with gasoline-filled automobile tires and lit on fire. The night before Sithole’s death, mobs rampaged through the township, looting the businesses of migrants from other African countries and setting foreign-owned shops on fire.

Two journalists from South Africa’s Sunday Times newspaper captured the horrific scene of Sithole’s murder, shining a spotlight on the anti-immigrant violence that erupted across the country in the wake of a speech last month by Zulu King, and presidential ally, Goodwill Zwelithini in which he suggested foreigners were taking South Africans’ jobs and that they should “pack their belongings and go back to their countries.” When the journalists rushed the profusely bleeding Sithole to a nearby medical clinic, the staff could do nothing: the doctor scheduled to be on duty that day had not come into work. A migrant himself, he had been too afraid of becoming a victim of a xenophobic attack.

South Africa’s President Jacob Zuma cancelled a state visit to Indonesia on Saturday to deal with the issue, and swore that such attacks would not be tolerated. But as police started rounding up suspects in Sithole’s murder and arrested some 300 in connection with other attacks, South Africans are reeling with the realization that such violence can no longer be attributed to the legacy of Apartheid rule, but that there are fundamental problems within society that must be addressed. “And so we are back to what we were, a nation with unrest and flashpoints. A country where mobs sharpen their machetes and vow to kill in front of a wall of riot policemen poised to fire. That was the image of Apartheid South Africa. Now it is the image of post-democracy South Africa,” wrote Ranjeni Munusamy of the influential Daily Maverick news site. “South Africa is the shame of the continent and a deviant of the world, and will continue being so until it changes its culture and values.”

According to research by Jean Pierre Misago at the African Center for Migration and Society, more than 350 foreigners have been killed in xenophobic attacks in South Africa since 2008. As a result, South Africa’s reputation as a refuge for the continent’s dispossessed has been shaken, steadily eroding the regional goodwill that once cemented the country’s position as an economic giant, arbiter of African disputes and example for peaceful reconciliation. If South Africa can’t get its own house in order, it can hardly lead the continent, lamented South Africa’s Nobel Peace Prize winner Archbishop Desmond Tutu in a statement released by his foundation. “Our rainbow nation that so filled the world with hope is being reduced to a grubby shadow of itself more likely to make the news for gross displays of callousness than for the glory that defined our transition to democracy under Nelson Mandela.”

That transition saw an influx of new migrants from Africa and Asia: out of a population of 51 million, estimates for the number of migrants range from 2 million to 5 million. Now several thousand Congolese, Zimbabweans, Malawians and Ethiopians that long considered South Africa to be their home have gathered in ad-hoc transit camps awaiting repatriation to countries they have not seen for years. On Saturday, Zimbabwean President Robert Mugabe, currently Chair of the African Union, expressed his “shock” and “disgust” over the attacks, which claimed two Zimbabwean lives. “Our own African people on the African continent must be treated with respect… If there is any issue arising from influx [of foreigners]… surely that can be discussed and measures can be taken to deal with and address the situation.”

In addition to inflammatory speeches by local and national leaders, the current outbreak of xenophobia has been linked to widespread dissatisfaction over the government’s inability, 21 years on, to reverse the poverty and income disparity that defined black lives under Apartheid. While the country has made significant progress in some areas, millions still live in shantytowns, and more than a quarter of the population is unemployed. Zulu King Zwelithini’s defenders claimed that portions of his speech had been taken out of context, but for a population already convinced that foreigners have taken advantage of a porous border and lax immigration laws to “steal” jobs, his complaints about “foreigners everywhere…. They dirty our streets… You find their unsightly goods hanging all over our shops” were ample tinder for a conflagration. Even though, according to research by fact clearing warehouse Africa Check, only four percent of the working population aged between 15 and 64 could be classed as “international migrants.”

President Zuma has pledged to halt the violence that is giving South Africa such a bad name. On Saturday, he told residents of one transit camp waiting for transport to their home countries, “Those who want to go home, when the violence stops you are welcome to return.” For many, it is already too late. “He says we will be safe, but it’s not safe for us,” Zimbabwean Ronald Dandavare told the Times newspaper as he waited to get on a bus destined for Zimbabwe. “People won’t listen. We will be killed one by one.” That’s exactly what the attacks were meant to achieve. Until the government can address the root causes of resentment, and the lawlessness that allows violence against foreigners to go unpunished, xenophobic attacks are likely to flare again. 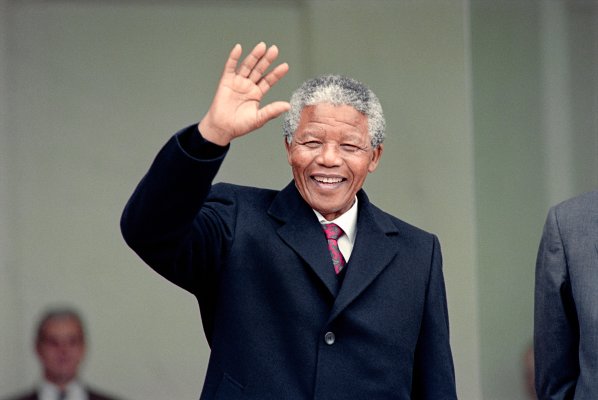 Sequel to Nelson Mandela's Memoir Announced
Next Up: Editor's Pick