A Decade of YouTube Has Changed the Future of Television

The video sharing service posted its first video on April 23, 2005. (That video, Me at the Zoo, has subsequently been viewed 19 million times in 10 years.) YouTube changed everything about television, from public access to major networks. In one decade, YouTube has developed a culture of its own and is a threat to the conventional business model of television—but not in the way world expected.

YouTube was originally created to make it easy to upload videos and post them on blogs, a medium that was then pushing past the fringes of the Internet and into the mainstream. Quickly, YouTube became a destination of its own, one that traditional television producers thought they could harness to tap into the growing power of the Internet. The first clip I ever remember going to YouTube specifically to watch was Lazy Sunday, the first “Digital Short” produced by Saturday Night Live. It went on YouTube, iTunes and a few other websites on Dec. 17, 2005 and was perhaps the first viral video — particularly on YouTube, where it was free.

The Lazy Sunday story exemplifies early fears about YouTube. It racked up 5 million views but was pulled by NBC two months later. (These days you can visit Hulu or Yahoo Screen, platforms that didn’t even exist at the time, to watch it.) In YouTube’s infancy, many television, movie and music companies were worried that users would steal all of their copyrighted material and post it online for free.

That never really came to pass on a large scale. Instead, YouTube evolved as a platform that cooperated with television. For one thing, the company started taking down clips if the owners complained. To this day, it’s still nearly impossible to find a clip from The Simpsons on the site. In 2006, the same year that TIME named “You” the Person of the Year, YouTube entered into a marketing deal with NBC. In 2007 it partnered with CNN to ask the presidential candidates questions that were posted on YouTube and in 2012 it partnered with ABC to live stream the debates directly on the site.

And it wasn’t just a matter of working alongside television: YouTube has become integral to the success of many TV shows as the place where they post clips, highlights, trailers, previews, recaps and other goodies that don’t make their way directly into the show. Just this month Amy Schumer racked up 2 million views with her parody video “Milk Milk Lemonade,” which is really a preview of the upcoming third season of her Comedy Central show.

It’s been a boon for late night programs, the place where many Americans go to watch the antics of Jimmy Fallon and Jimmy Kimmel. Bill Maher does an extra segment of his HBO show Real Time, called Over Time, directly on YouTube. Getting videos to be shared widely is no longer an afterthought, but rather something that is integral to a show’s success and sometimes a means with its own end. Kimmel infamously created a fake “Twerk Fail” video that went viral with 18 million views and then went viral again when he exposed it as a hoax, gaining another 20 million clicks.

But just as television was starting to adapt to YouTube, with networks treating the site as a sidebar, the viewers started treating it more like a public access station. Around 2007, just as television was warming up to the site and the late night shows were gaining attention of viral videos, a new crop of stars started to emerge. With the ubiquity of video cameras in laptops and cell phones and the ease with which people can use digital editing software, it became easy for anyone to start their own YouTube channel and ride it to huge success. PewDiePie, which started in 2010 and is now the largest YouTube channel, with 37 million subscribers, is just a dude making funny voices while playing video games. Tyler Oakley (6 million subscribers, since 2007) just talks about his life and love of celebrities. Bethany Mota (8 million subscribers, since 2009) gained popularity for “haul videos” where she would show people what she just bought at the mall. Using YouTube’s ad-revenue sharing partner program (and even more lucrative endorsement deals), those gurus and stars stood to gain in ways that old-fashioned public-access creators couldn’t.

YouTube started developing its own culture and its own genres, from makeup tutorials and song parodies to GoPro skateboard theatrics and toy-unboxing videos. Television no longer has to worry about YouTube stealing their shows, because YouTube has plenty of shows of its own. YouTube even started calling them “channels” and in 2011 Google spent almost $200 million to launch their own original channels with partners like Madonna, Pharrell Williams, VICE and The Wall Street Journal.

YouTube serves as a source for some of television’s most innovative new ideas. Broad City, originally a web series, made the jump to become one of Comedy Central’s biggest and buzziest shows. Grace Helbig strated a YouTube channel in 2007 while bored at a house-sitting gig and now interviews celebrities on her E! talk show. VICE, the media company whose short documentaries are available on YouTube, just signed a huge deal with HBO to provide a daily news broadcast. Though television may still be more prestigious than the Internet, the creativity is online. And the public access nature of YouTube is starting to bleed onto mainstream television. Just last year, FYI network ordered 13 episodes of a show based on Epic Meal Time, an extreme cooking show that has almost 7 million subscribers.

YouTube is not only the future of television, but also preserving its past. It serves as an online time capsule preserving all sorts of things that we never had access to before. Want to watch an episode of the Gummi Bears, your favorite cartoon from your childhood? Find it on YouTube. Need a refresher on the lyrics to the Full House theme song? Thanks, YouTube. Want to watch all the fights from Dynasty? Thank God for YouTube.

Rather than pirating off and siphoning from television, YouTube serves to amplify it, cultivating our remembrance and interest, giving us reasons to tune in — where would John Oliver be without all the YouTube clips? — and creating ideas for future shows. YouTube has not only replaced public access television, a place where anyone could have a voice, but has perfected it, creating its own ecosystem that is a parallel to television. And these days, with teens thinking YouTube stars are bigger celebrities than the cast of the Big Bang Theory, it’s only a matter of time before public access takes over all the airwaves. 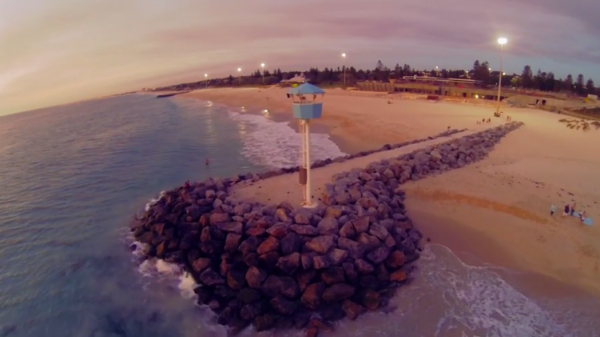 Watch a Photographer Save His Drone From Plummeting Into the Ocean
Next Up: Editor's Pick