A newsstand vendor returns change to a customer near a book titled Xi Jinping: The Governance of China displayed on sale in central Beijing on Dec. 10, 2014
Jason Lee—Reuters
By Hannah Beech / Beijing

This September, China’s President Xi Jinping will travel to the U.S., the confident leader’s first state visit there since taking helm of the world’s second largest economy in late 2012. Americans who wish to know Xi better will get a chance next month when his book will be formally launched in the U.S. during a New York City book fair.

The first book to be published by a sitting Chinese President, Xi Jinping: the Governance of China is a 516-page collection of 79 of Xi’s speeches, interviews, instructions and correspondence — all clarified by notes on China’s history and culture. The book’s plain white cover features Xi’s disembodied head floating above the title. Readers can peruse 45 biographical pictures inside. Chapters look at China’s economic development, ecology and the unfolding anticorruption campaign. An English-language hardcover edition is listed at $32.56 on Amazon.

The book’s U.S. launch in late May will occur at BookExpo America (BEA), according to its Chinese publisher, which is sending a delegation to attend the trade fair. This year, BEA will be focusing on China. The China-related books that will be on offer tend to hew to a version of Chinese history that will surely please the Chinese Communist Party. Events at the New York book fair include sessions on a 25-volume collection that gives a “panoramic view of the crimes committed to the Chinese people by Japanese militarists” and a study of the time Xi’s father Xi Zhongxun spent as a communist revolutionary in the caves of Yan’an.

During the British launch of Xi’s compendium earlier this month at the London Book Fair, China’s Ambassador to the U.K. Liu Xiaoming described it — and the man himself — in glowing terms. “Readers will appreciate President Xi’s wisdom, charisma and leadership style,” Liu said on April 15. “President Xi has a literary style that is sincere, candid, unadorned and vivid.” Late last year, Facebook founder Mark Zuckerberg, whose social-media site is currently banned in China, was quoted by Chinese media saying he had bought the book for his employees so that they could understand China’s political system.

Yet on Amazon, the hardcover English edition of Xi’s book is 420,914th in the website’s April 20 sales rankings. Xi’s speeches and other musings are not included among this year’s top 100 best sellers on Dangdang, a leading Chinese online bookstore. (The book, however, is listed as the 53rd most popular book on Dangdang over the past 30 days.) Currently, Dangdang’s top-selling book is a Chinese translation of The Kite Runner.

While China-watchers, like Zuckerberg, may be poring over Xi’s tome, the reaction at home, where the book sells for roughly $13, may be different. At the Beijing Xidan bookstore, a store manager surnamed Yang said her shop was offering a deal in which people who purchased more than 1,000 copies could receive a 15% discount. But Yang admits Xi’s book isn’t selling very well. “The book is not cheap,” she says.

Chinese Communist Party members and civil servants are regularly instructed to read up on key speeches by top officials. Perhaps that’s why there’s not as much interest in buying Xi’s book. “Why should I bother reading his book if I haven’t been asked to read it?” asks a 26-year-old health and family-planning official from Sichuan, who declined to give her name because of the sensitivity of the topic. “We are actually pretty busy.” 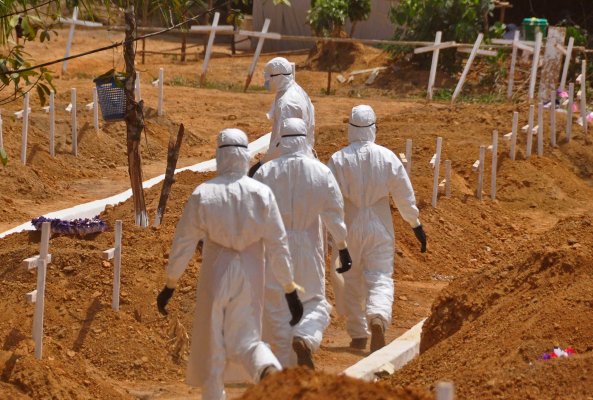 WHO Acknowledges Failings of Ebola Response
Next Up: Editor's Pick