Ohio Governor John Kasich took his presidential flirtations to a new level Saturday, asking New Hampshire Republicans to keep their powder dry as he decides whether to run.

“Think about me, would ya,” he said at the party’s first-in-the-nation conference. “Don’t commit too soon.”

Buoyed by a growing economy in Ohio, Kasich has been floating a presidential run for more than a year in GOP circles, but has done little to expand his profile nationally or in Iowa and New Hampshire. In an 18-minute address followed by a brief question-and-answer session, Kasich, a former House budget chairman, set about trying to change that, educating a roomful of GOP voters about his record in Washington and Columbus.

“Foreign policy experience, actual success in Washington … changing Ohio and having people say, ‘Pretty good guy, not perfect, pretty good guy,”’ Kasich said. “Whether I run for President or not, I want you to think about this, because Ohio is a microcosm of America.”

Kasich said he has yet to make up his mind whether to run. “I’m trying to figure out what the Lord wants me to do with my life,” he said. “If I feel this is my call, I will come back again and again and again — and in the meantime I’m not going to change my message.”

“My only goal and my only purpose is to build a stronger situation for the people that I serve,” he said. “And that’s why I wanted to come here.”

Known for a do-it-his-own-way approach to governance, Kasich tried to curb the power of public-sector unions but expanded Medicaid. In Congress he fought to balance the budget — and has embraced the cause of passing a national balanced-budget amendment to the Constitution. He won re-election in 2014 by an overwhelming margin against a scandal-plagued Democratic opponent.

Kasich joked about his failed 2000 run for President, when he withdrew before the first votes were cast, saying he couldn’t hold town halls because voters wouldn’t show up.

Kasich’s remarks avoided the criticism of Democrats or his Republican opponents that has become a staple of GOP stump speeches. Instead, he said he wanted to lay out a conservative vision for the nation.

“You know, I’m a fighter,” Kasich said. “I could fight with the best of ’em. I could come in here and spend this whole speech blasting Barack Obama and all this other stuff, but that’s not what I wanted to do.” 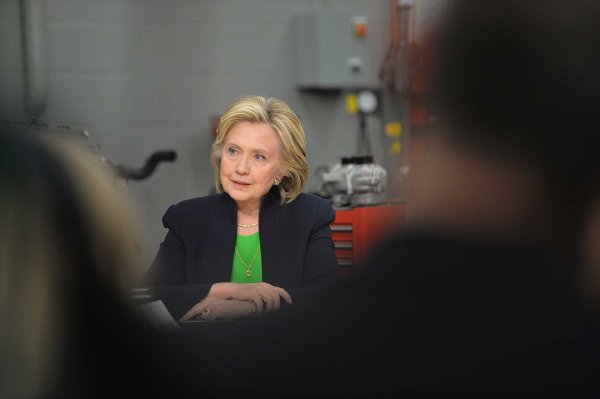 How Hillary Clinton is Trying to Win Over Liberal Critics
Next Up: Editor's Pick