At least 35 people died in a suicide bomb attack in eastern Afghanistan on Saturday morning, with the Islamic State of Iraq and Greater Syria (ISIS) claiming responsibility for what, if confirmed, would be the terrorist group’s first major attack in the country.

More than 100 people were wounded in the bombing outside a bank branch in Jalalabad in Afghanistan’s eastern Nangarhar province.

Separately, a militant group linked to ISIS reportedly released a picture of the alleged suicide bomber who struck the bank branch in Jalalabad as people queued up outside to collected their paychecks. The New York Times identified the branch as same one that was attacked in 2011. Responsibility for that bombing, which killed 38 people, was claimed by the Taliban.

A Taliban spokesman denied responsibly for the suicide attack on Saturday, telling Reuters: “It was an evil act. We strongly condemn it.”

If confirmed as an ISIS attack, Saturday’s suicide bombing would mark a significant expansion of the terrorist group’s activities from its base in the Middle East. The attack comes against the backdrop of a significantly reduced presence of foreign troops in the conflict-ridden nation as international forces exit Afghanistan. In March, President Obama announced a slowdown in the pace of withdrawal of U.S. troops in the country, saying America would maintain a nearly 10,000-strong force in Afghanistan through 2015.

The announcement was made during a visit to the U.S. by President Ghani, who, in a speech before a joint session of the U.S. Congress, warned of the “terrible threat” posed by ISIS to the “states of western and central Asia.”

“Terrorist movements whose goal is to destabilize every state in the region are looking for new bases of operation,” he said. “We’re the front line. But terrorists neither recognize boundaries [nor] require passports to spread their message of hate and discord. From the west, the Daesh is already sending advanced guards to southwestern Afghanistan.”

The suicide bombing was one of three explosions that shook Jalalabad on Saturday morning, including what was reported to be a controlled detonation after authorities discovered motorcycle rigged with explosives. 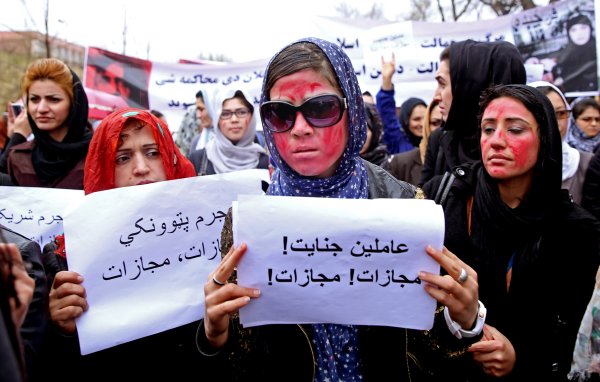