Maybe We Should Negotiate With Terrorists

In November of last year, news broke of President Obama’s order to conduct a comprehensive review of how the U.S. government handles hostage situations involving Americans taken by terrorist groups abroad. The policy review, which is still underway, launched in the midst of frustration and criticism from the families of American hostages—some of whom ISIS held and murdered—over the government’s response to the plight of their loved ones. After the horrific deaths of (among others) journalists James Foley and Steven Sotloff and human rights activist Kayla Mueller, critics have pointed to the fact that several other—mostly European—hostages were recovered from ISIS after officials paid ransoms for their safe return.

“Kidnapping has been on all of our minds since the terrible events perpetrated by ISIS,” said Gary Noesner at a recent discussion of U.S. hostage policy at New America, “but it’s a crime that’s been around quite a long time.” Noesner, former chief of the FBI Crisis Negotiation Unit and author of Stalling For Time: My Life as an FBI Negotiator, has helped deal with over 120 overseas kidnapping cases involving terrorist groups from South America to the Middle East—including the cases of the U.S. defense contractors held by Colombian FARC fighters and Wall Street Journal reporter Daniel Pearl.

Noesner pulls no punches with where he stands on negotiating with hostage-takers, even when they’re terrorists, and rejects the idea that negotiation implies “capitulation or acquiescence.” In fact, given that military rescue presents the highest risk of death for the captive, “I’m a big believer in negotiations…Negotiation– although for some it has become a dirty word—means dialogue. It allows us to gather information, buy time, develop other options and resources and sometimes actually resolve…the situation,” he observed.

“There’s an interesting distinction” that the U.S. government makes, said New America International Security Program Director Peter Bergen, who moderated the discussion and has worked extensively in countries where high-profile abductions have occurred. “They say ‘we will negotiate, but we won’t make concessions,’ which I think is largely a distinction without a difference, because what negotiation begins with the idea we’re not going to give you anything? That doesn’t seem like much of a negotiating position.”

If he were making recommendations to the President about how to change government policy, Noesner said, he would suggest tamping down the rhetoric of “no negotiation with terrorists” and supporting (with information and resources) the efforts of families and companies to negotiate. Debra Tice, the mother of Austin Tice, an American journalist who has been missing in Syria since 2012, agreed with Noesner’s assessment. “We should not let our desire to punish terrorist kidnappers cloud our judgment and restrict our options,” Tice declared.

“I am known as the mother of a hostage,” she said, whose life is now defined by “determining who is holding my son and how to bring him safely home.” Tice and her husband have worked tirelessly since 2012 with American and foreign governments, journalists, and groups like Reporters Without Borders in their quest to recover Austin safely. And yet, said Tice, until news of the President’s hostage policy review became public in November, she and her family were completely unaware that such a policy even existed.

“Though it has informed every moment of our lives for the past 966 days,” Tice marveled, “we still have never seen this policy, because it is a classified presidential directive and we do not have clearance.” She cited a senior government official (who also reportedly threatened family members with prosecution if they negotiated with and paid a ransom to ISIS) who told them that getting the necessary security clearance to review the policy and get further information about their son would cost over $100,000 and take more than 15 months. “What we have not been able to overcome are the twin obstacles of protocol and culture” within the government.

More than anything else, said Tice, “every hostage situation is unique” and requires “a desire to be creative, a desire to be flexible,” when determining courses of action. She believes such an outcome can only occur if the President creates an entirely new policy that allows for a “thoughtful and measured response” on a case-by-case basis. Drawing upon the knowledge gathered during her family’s ordeal, Tice recommended that any new policy require the President to designate a “single point of accountability,” such as an interagency hostage recovery coordinator, whose “singular mission [is] securing the soonest and safest return of the hostage.”

Tice’s suggestion seemed to resonate with Barak Barfi, a journalist and New America research fellow who served as spokesman for the family of Steven Sotloff. Barfi noted that he had seen firsthand how bureaucracy and a “lack of cultural understanding” about the region became barriers to forward progress in Sotloff’s case. Barfi also spoke to the role of intermediaries in hostage situation, which Noesner emphasized is “very critical particularly when we’re talking about the jihadi groups.” Barfi, who acted as a go-between for the Sotloff family, was acutely aware that as a journalist, he lacked the access and relationships that an intermediary from the intelligence community might bring to the table.

Journalists do, however, play pivotal roles in bringing information to light in exactly the places where Americans are most likely to fall victim to kidnapping– the “dysfunctional countries” (as Noesner called them) where violence and chaos are a daily reality. “By definition, journalists [like NGO and aid personnel] are going to be in dangerous places,” noted Bergen. So how should we address the commonly-held but controversial view that Americans like Austin Tice who travel to risky parts of the world like Syria should somehow have expected what happened to them?

Tice quietly acknowledged that she receives emails to that effect: “Free country, your son made a choice, not my problem.” Noesner categorically dismissed this view, pointing out no matter what may have precipitated the kidnapping, all Americans—from a drunk businessman to a deserting soldier—deserve their government’s best efforts to get them out, even if they face prosecution or consequences after their safe return.

In describing Austin and his decision to travel to Syria, Debra Tice said of her son, a former Marine and law student: he has “always been interested in the big wide world.” Barfi squeezed her hand as he described Austin’s efforts to provide “very crucial information” during an important time of upheaval in Syria in 2012. Because the U.S. intelligence community did not have appropriate assets in place, said Barfi, “it was people like Austin who were getting that [information]. He was doing a great service to his country and we have to do everything we can to get him out.”

Jane Greenway Carr is an ACLS Public Fellow and Contributing Editor at New America. This piece was originally published in New America’s digital magazine,The Weekly Wonk. Sign up to get it delivered to your inbox each Thursday here, and follow @New America on Twitter. 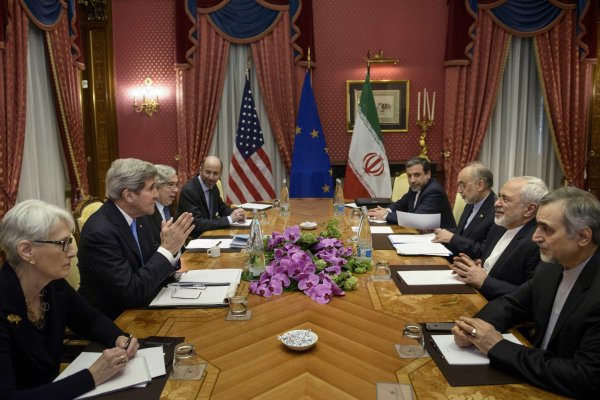 Chertoff: Iran Deal Worthless Without the Right Enforcement Mechanisms
Next Up: Editor's Pick