A weapons analyst at the Central Intelligence Agency, Lisa was sorting resumes with a colleague when something shocking happened.

Lisa, who is black, was helping her white coworker find the best applicants for overseas posts, which are considered prestigious within the agency and can lead to more important jobs down the line. Lisa was midway through her own overseas posting and had already seen how it helped her career.

But looking at the resumes, her coworker casually said that she would not hire a black man.

“She told me that if there is a white man — doesn’t matter how capable the black man is — I’m picking the white man,” recalled Lisa. (At the request of the CIA, TIME agreed to withhold last names of agency employees, many of whom work undercover.) “As a minority, you know that, but to have someone tell you that? It’s telling.”

Like workplaces across the country, the CIA is striving to improve the diversity of its staff. And just like other companies, the agency nicknamed The Company has found that progress comes in fits and starts.

In interviews with more than a dozen black officers, TIME found that while the CIA has made diversity a top priority, it still struggles to recruit African-Americans and promote them to higher positions.

Diversity is not just important for its own sake. As an intelligence agency, the CIA lives and dies on its ability to interpret complex data about foreign countries. Black agents noted multiple times when their unique perspective as a minority within the United States led them to a breakthrough in understanding a foreign conflict.

“Diversity is critical to the success of CIA’s mission. We need a workforce as diverse as the world we cover,” CIA Director John Brennan said in a statement to TIME. “CIA has come a long way in broadening the demographic of its senior ranks, but we still have significant work to do.”

To that end, Brennan launched the Diversity in Leadership Study to examine the current demographics of the agency’s senior ranks. A similar study on women, who make up 46% of the CIA workforce, was released in 2013.

A key part of the study, which is being directed by famed lawyer and civil rights activist Vernon Jordan, will be recommendations on how to better foster an environment where people from all backgrounds can rise to the top.

That was not always a priority. According to Milo Jones and Philippe Silberzahn’s book Constructing Cassandra, in 1967 “there were fewer than 20 African Americans among the approximately 12,000 non-clerical CIA employees.”

Spenser, a black officer who oversees the Africa division, said that when he started in the 1990s, there was “not a single non-white division chief,” one of the highest-ranking positions in the agency.

The CIA would not disclose the size of its workforce nor its demographic makeup to TIME. But Spenser said that times have changed.

“We now have division chiefs that are Hispanic, that are Asian. That are black, women,” he said. “It’s completely different.”

As with other companies, a central part of the CIA’s efforts is recruiting. Intelligence experts say that the agency still has ground to make up on its reputation in the African-American community.

“The negative reputation has lingered on despite everyone’s best efforts,” says Mark Lowenthal, a former CIA officer and intelligence expert.

As the African-American community outreach manager for the CIA, Tiffany spends most of her time talking with black professional organizations about the agency. She said that she’s heard all kinds of misconceptions about the agency’s past and present, some of which she even believed herself in the past.

“When I was offered an opportunity to work for the agency, my initial response was, ‘oh hell no,’” Tiffany says. Now, she uses her story to get audiences comfortable with the idea of letting their friends and family members join the CIA.

Lowenthal remembers asking some young recruits — three black men — at their training graduation ceremony to get involved in recruiting as soon as possible.

“I said, go back to your schools and become mentors and recruiters,” Lowenthall recalls. “You’ll be much more effective than I can ever be.”

While not all officers participate in recruitment efforts, many black officers see it as part of their job. Reginald, a deputy chief of European analysis and a graduate of two historically black colleges — Howard University in Washington and Southern University in Baton Rouge, La. — makes it a point to recruit as often as possible, particularly at black schools.

Kim, who at 35 is already the chief of Africa analysis, recognizes the importance of recruiting.

“I actually went to a school not too long ago,” she says. “I saw their eyes get big when they noticed I was a young, African-American woman doing well at CIA. And I told them, you can come here and do this, too. I’m not that special.”

But recruiting is not enough. Within the agency, there are well-traveled paths to upper management that recruits need to navigate.

Lisa says she feels part of the problem is that white agents have done a better job of networking with higher ups that can recommend or “sponsor” junior officers for better positions. “They go to a different length to get positions than we do,” she said. “Often, they have an inside scoop, someone on the inside who can vouch for them.”

Michael, a 40-year veteran of the agency’s clandestine service, says a lot of black officers have felt that they have to prove they can do the work on their own. “We didn’t network,” he says.

He worked to change that, meeting with a handful of other black officers in the CIA cafeteria regularly to decompress and share advice.

“Even if we did a tour and came back three years or five years later, that roundtable was still there,” Michael says. It was important for black officers to have that space, and it’s something they continue today, gathering outside of Langley for social events and one-on-one chats. 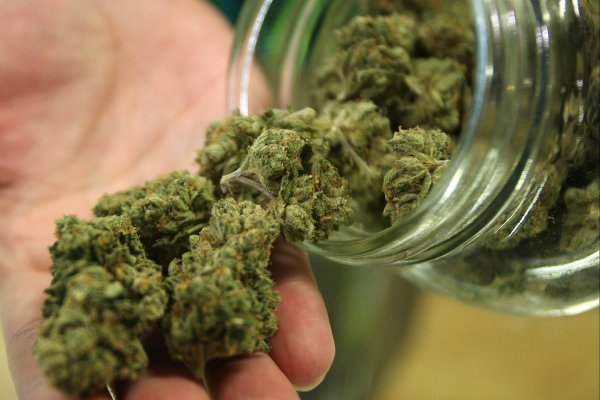 These Maps Show Changing Marijuana Laws Across America
Next Up: Editor's Pick