The lobbying/campaign finance/access matrix has corrupted American politics, divided our nation, and is well down the road to creating a system of political oligarchy.

Our Founders created a republic and, being keen students of the history of republics beginning with Athens, they knew that placing special and narrow interests ahead of the common good and the commonwealth was the corruption that destroyed republics. They feared this kind of corruption as the greatest danger to America’s success and survival.

By this standard, today’s American Republic is massively corrupt. Every interest group in our nation has staff lobbyists and hires lobbying firms. Thousands of lobbying firms now penetrate the halls of Congress as well as all State capitols and city halls. Those same lobbying firms collect funds for election and re-election campaigns. In exchange, they have access to legislatures and administrations, those who write the laws and make the regulations.

Worse still is the fact that, upon leaving office, Senators and House members are now becoming lobbyists and using their friendships and contacts to make millions of dollars. There are at least four hundred or more who have done so in recent years. Few if any of the Senators with whom I served in the 1970s and 80s ever became lobbyists.

With its monumentally wrong-headed Citizens United decision, the U.S. Supreme Court has now sanctioned this corruption and eliminated any chance for control of campaign contributions.

We have created what came to be known in late 17th and 18th century England as a division between the Court and the Country. The Court is composed of networks of political office holders and insiders, their lobbying and finance contacts, the policy centers which they inhabit between administrations, the offices they rotate in and out of, and a deep sense of shared entitlement, power, preference, and prerogative. The Country is all the rest of us.

It would be comical if it were not so tragic that the fashion of the day is to decry the evil of “Washington” by those already there and desperately seeking to stay in the middle of it.

The net affect of the money machine — lobbyists, fund raisers, and campaign consultants — is to severely narrow the field of those who can compete for office, especially national office. If the national presidency were to pass back and forth between two or three families in any Latin American nation we would call it an oligarchy.

But if those families can use carefully built political networks to raise a billion, or perhaps it is now multiple billions, of dollars to seek the presidency, what hope is there for the new voice, the fresh ideas, the innovative policies to address new 21st century realities?

If the corruption of our Republic by interests groups and their money, governance by a Court of rotating insiders, and fresh blood strangled from the political process is the ultimate product of a deck stacked against the Country, we are in for a precarious time in American history.

We will have created a political system and some form of government new in our history. But it will most surely not be the Republic of our Founders hopes and dreams.

Gary Hart, a former United States Senator, is the author of the The Republic of Conscience to be published July the 4th.

Read next: Chelsea Clinton Gets Ready to Take the Stage 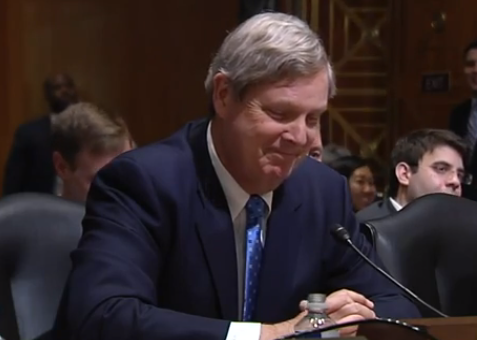 That Moment When a Senator's Phone Plays 'Let It Go' at a Hearing
Next Up: Editor's Pick