Cuban President Raul Castro speaks during a meeting with President Barack Obama on the sidelines of the Summit of the Americas at the ATLAPA Convention center in Panama City, on April 11, 2015.
Mandel Ngan—AFP/Getty Images
Ideas
By Congressman Mario Diaz-Balart
Congressman Mario Diaz-Balart represents Florida’s 25th Congressional District and is Chairman of the Transportation, Housing and Urban Development Subcommittee of the House Committee on Appropriations.

President Barack Obama continues to appease brutal dictatorships while gaining precious little in return. He conflates the Cuban dictatorship with the Cuban people when in reality, their interests are diametrically opposed. With sweeping arrogance, President Obama acts as though he stands above history with wisdom that surpasses every American president since Dwight D. Eisenhower, the first to impose sanctions on the Fidel Castro regime. Obama’s foreign policy is radical even compared to his own party. President John F. Kennedy imposed many of the first stringent sanctions against the Castro regime, and President Bill Clinton signed into law the LIBERTAD Act, which codified sanctions that Obama now opposes.

All eight Cuban-American senators and congressmen from both sides of the aisle, strongly disagree with him. One would think that he might consult with us.

The Cuban people simply want to gather peacefully, speak their minds, practice their faiths, access the Internet, and enjoy the fruits of their labor. The ailing octogenarians that run Cuba would never allow those simple liberties. A key point often overlooked is that, under current law, the president can lift sanctions once free, fair elections are scheduled, political prisoners are released, and independent press, organized labor, and political parties are legalized in Cuba. The Cuban people deserve no less, yet Obama abandoned the U.S. commitment to those basic goals when he abandoned his most significant leverage to advance them.

Obama’s capitulation to dictators apparently has no bounds. In 2001, five Cuban spies were convicted for conspiracy to commit espionage. One of those five convicted spies, Gerardo Hernandez, was additionally serving two life sentences for the murders of innocent Americans and a legal permanent resident in the shoot-down of civilian aircraft over international waters. Obama’s State and Justice Departments arranged, while Hernandez was in federal prison, to help him have his wife in Cuba artificially inseminated. Shortly thereafter, in another striking concession, Obama commuted his sentence and ordered his release. When has any president been so embarrassingly eager to appease a brutal, anti-American, repressive dictatorship?

Obama’s policies also hurt the Cuban people by emboldening a regime already ready to oppress them. Since the president’s Dec. 17, 2014 announcement, there have been approximately 1,300 political arrests in Cuba. During the Obama administration, five pro-democracy activists have died – Orlando Zapata Tamayo, Juan Wilfredo Soto Garcia, Laura Pollan, Oswaldo Payá and Harold Cepero. The Castro regime exports its brand of violence abroad to Venezuela, where it subverts democratic institutions and helps to repress the Venezuelan people. And just recently, with the president’s implicit blessing, the Castro dictatorship brazenly flexed its impunity at the summit in Panama by beating pro-democracy activists, including American citizens, and ejecting an American journalist from an international press conference. Three days later, the regime was rewarded for those human rights abuses with another monumental concession: removal from the state sponsors of terror list.

Removal from the terrorism list is especially disturbing when the Castro regime continues to provide safe harbor to one of the FBI’s most wanted terrorists, Joanne Chesimard, terrorist bomb-maker William Morales, and more than 70 other fugitives from U.S. justice. It also has ties to ETA and FARC terrorists, supports other rogue states including Syria, Iran, Venezuela, and North Korea, and provides support to Hamas and Hezbollah. In July 2013, Panamanian authorities discovered that the North Korean ship Chong Chon Gang was carrying military weapons that it had loaded from Cuba. A UN panel of experts determined that the shipment was the biggest violation of those international sanctions to date. Further, the Castro regime maintains an extensive espionage network against the United States. Ana Belen Montes (Defense Intelligence Agency analyst, serving a 25-year sentence for conspiracy to commit espionage), the five convicted “WASP” network spies, Walter and Gwendolyn Myers (State Department analyst and his wife serving sentences for conspiracy to commit espionage), Elsa and Carlos Alvarez (Florida International University professor and his wife, serving sentences), and Marta Rita Velazquez (USAID, indicted but fled to Sweden) are a few examples of those who have spied on the Castros’ behalf against the U.S. in the past 15 years.

Obama’s strategy has been an abysmal failure wherever it has been tried. During the horrific slaughter of Iranian protesters during the summer of 2009, President Obama was nowhere to be found throughout most of that turmoil. When he finally decided to speak, he declared, “the United States respects the sovereignty of the Islamic Republic of Iran, and is not interfering with Iran’s affairs.” Defending liberty is hardly “interference,” whether referring to the mullahs in Iran or the Castro brothers. Instead, it is the minimum required from those of us living in freedom. As President Obama negotiates with the murderers in Tehran and Havana, he has excised those regimes’ terrorism abroad and atrocities at home – points any U.S. president should find salient – from the negotiating table.

One thing is clear: The president will barrel along with his failed foreign policy agenda regardless of the harm to American security interests, damage to pro-democracy movements, and the diminishing trust of our allies. Obama’s foreign policy is an aberration in America’s long and proud history of supporting freedom across the globe. The U.S. Congress continues to stand with the oppressed people of the world struggling for freedom, and will do all it can to keep the president from bargaining away every ounce of leverage we have to the world’s worst actors. 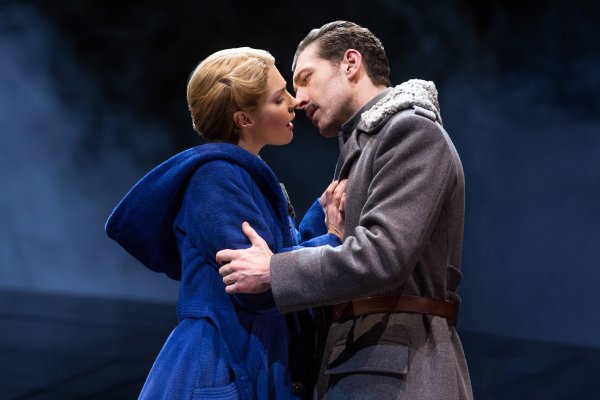 Former White House Adviser: What Vladimir Putin Could Learn From 'Doctor Zhivago'
Next Up: Editor's Pick